Just what is it that you can do, with your significant other, to outwardly denote to the world that We Are A Couple And We Are With Each Other? Public displays of affection are an obvious, but the PDA can’t always be pulled off tactfully or in the right context. Wedding rings are specifically designed to tell the world, “I’m taken,” but they’re small and, heck, tons of people wear rings and they’re not always easy to see. But let’s say you’re going to a Christmas party and you want to demonstrate that, Indeed, We Are A Couple. How about his and her Christmas sweaters?! Great idea, and you’ve come to the right place!

But we found some. And some of them are Christmas sweaters and some of them are Christmas sweatshirts. (We make it clear in the descriptions, so you don’t have to guess.) While they’re all marketed and advertised in pairs, some of the items below come with just one sweater or sweatshirt, and you have to order a second to complete the set. Others include both pieces of apparel in one order. As for the theme we were going for, we were looking for fun. And, generally speaking, all the items below are humorous, although some more so than others. But humor, like the decision to wear a couple’s Christmas sweater, is a matter of personal taste. If you’re gonna be that couple, then dive right in and grab one or two of these babies off our list of the Top 10 Best Couple’s Christmas Sweaters.

A classic go-together — bacon and eggs! The only thing closer is you and your bae. The sweaters are 80 percent cotton, 20 percent poly and they start with an extra small size and go all the way up to double extra large. They’re both black and, on one sweater, the bacon is wearing a Christmas sweater and a Santa stocking cap while ice skating among falling snow. On the other sweater, the egg is sporting ear muffs and is also on skates, schlepping a sled loaded with gifts. The saying is “Don’t go bacon my heart” on the bacon sweater and “I couldn’t if I fried” on the egg sweater. For those of you not up on your Elton John-Kiki Dee hits, it’s a couple of lines from their 1976 hit, “Don’t Go Breaking My Heart.” In the song, Elton sang the line “Don’t go breaking my heart” while Kiki sang in response, “I couldn’t if I tried.” That said, these sweaters can be sized so either member of the couple can wear either the bacon or the egg. Check out the music vid! 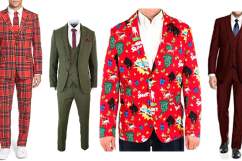 This is a gigantic, one piece sweater for two people. It has two arms and two neck holes. The idea is that you put the pullover sweater on together, with each of your heads sticking out the neck…like normal. The difference is that only one of each person’s arms will be (as normal) in the arm of their side of the sweater. As for the sweater design, it’s red on one torso side and green on the other. Both sides of this lightweight acrylic garment feature a stocking image on the front. But before you just willy-nilly throw this thing on together, there’s a decision that must be made. The sweater front has, on one torso area, the words “I’ve Been Nice” while the other torso area reads “I’ve Been Naughty.” Who goes where? That’s up to the two of ya’s. Similarly, what you do with your hand inside the sweater is up to you, too. Just watch out for the person on the naughty side.

Buy the Two In One Naughty & Nice Christmas Sweater here. 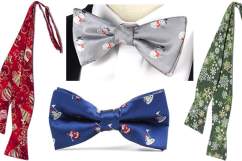 Well aren’t you two just the best dressed Christmas sweater wearing couple? That’s the idea, anyway, with the “formal” design of this sweater. This lightweight acrylic sweater is a pullover, but it’s designed to look like a sort of oversized button up cardigan V-neck with a green and white polka dot tie. The fabric is soft and stretchy and the manufacturer, Uideazone, recommends ordering a size larger if you want a bit looser fit. The sweater is about as festive as they come, with a very bright red base color. The images (besides the fake buttons and tie) are white reindeer and snowflakes. One sweater per order.

For the pug lover, for the dog lover, for the animal lover or, if you don’t even have a pug, for the lover of non-sequiturs and esoteric humor. This crew neck sweatshirt comes in red or green and features a big image of a pug sporting decorated antlers and wearing a holly collar. These couple’s Christmas sweaters — which, in this case, are sweatshirts — come from a vendor that is part of Amazon’s Handmade Gift Shop. The vendor, Bachelorettee, creates custom shirts and accessories in Louisiana. They say “we use Gildan 1800 sweaters” and the print “will not crack or peel off.” One shirt per order. 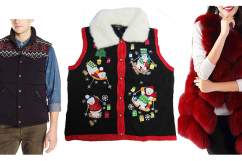 You can’t get any clearer than this. One of the sweatshirts says “Wifey” and the other says “Hubby.” Who knows? It could be that you would like it to serve as a Christmas party declaration that implies “When you drink too much eggnog, just remember that’s my hubby.” Or it might imply “Yes, other dudes at the party, that great looking person with ‘Wifey’ on the sweatshirt is mine, not y’all’s.” Perhaps you want these Christmas sweaters — which, again, are actually sweatshirts — because at that same party you want to make sure than no matter how much Christmas punch either of you have, you’ll be able to remember who you came with. Or maybe you think the shirts are just kinda cute, which they kinda are. The shirts are bright red and are decorated with white lettering and prints of stars, Christmas lights and reindeer. Cotton/poly blend. Two shirts come with one order and there is just about every size combo you’re gonna need. A his and hers for you and yours. 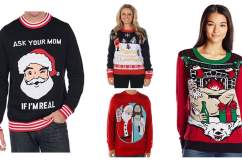 6. She & He Is My Christmas Gift Couple’s Christmas Sweater

This will probably get the “aaww” award of the Christmas party. Or those with a lower tolerance for sweets may want to give you the “awful” award. No matter! It’s Christmas and these are fun sweatshirts. One says “She is My Christmas Gift” while the other says “He is My Christmas Gift.” The design is very simple, with an easy to read typeface. The “she is” shirt comes with a green font, except for the word “Christmas,” which is in red. Same, but opposite, for the “he is” shirt. These crewneck sweatshirts are a 50 percent cotton, 50 percent poly blend. You do have the option of customizing the shirts by specifying how long you’ve been a couple (the ordering process accommodates adding the extra information, but it’s not required if you prefer the back of your shirts being blank). Two shirts per order but you can contact the seller if you just want one shirt.

Buy the She & He Is My Christmas Gift Couple’s Christmas Sweater here. 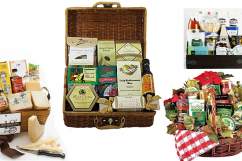 So you’ve been a couple long enough that you, a) know what the other person is going to say before they say it or, b) you don’t always care what they’re saying. This may be the couple’s Christmas sweater — which is actually a sweatshirt — for you. On one shirt is an image of the gingerbread man saying “My leg hurts” because his right foot has been somehow removed. On the other shirt, a gingerbread person is asking, “What?” (They’ve been together so long, that the GBP asking “What?” is asking because he or she wasn’t really listening, despite the fact that the other GBP was stating something substantially significant: Hi, lost a foot.) These shirts are 80 percent cotton, 20 percent poly and they need to be washed inside out in cold water and then air dry only. The manufacturer, 365 Printing, emphasizes that you adhere to their size chart when ordering. 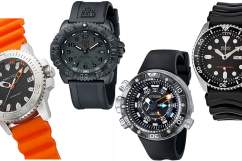 ‘Twas Plato who stated that comedy inherently contains a bit of scorn. Perhaps the philosopher would, then, endorse these couple’s Christmas sweaters (which are actually sweatshirts). One shirt shows a reindeer saying “That’s it, I Quit!” while the other shirt shows Santa saying “I’ll Double Your Pay!” Taken literally, it may simply mean that the couple wearing the shirts truly believes that Santa’s reindeer are overworked and under paid. However, the message may imply that the person wearing the reindeer shirt feels they carry more of the load in the working matters of the relationship, while the person wearing the Santa shirt realizes this and is ready to capitulate. If that is so, the fact that the couple wears the shirt in public is clear evidence of the couple’s love and confidence in the relationship: we can air a bit of our dirty laundry in public! The shirts are black, 80 percent cotton, 20 percent poly. Two per order and there is every size combo you could want.

These are very bright green couple’s Christmas sweaters for the couple that digs elves. Both shirts, which are cotton/poly blends, feature a different elf “outfit” printed on the front of the shirt. The idea is that the actual person wearing the shirt becomes the head of the elf. One design is a full (headless) body of an elf, with prominent red and white striped stockings, red balls on the toes of the shoes, a white belt with red buckle and buttons and holly accents. The other shirt features a sort of “vest printed on a shirt” print. The accents are a red pointed collar, a red belt with diagonal small white stripes and a white belt buckle, red buttons and a green and red holly boutonnière. Two shirts per order.

This is a great deal — two pullover sweatshirts (these are not sweaters, they’re hoodie sweatshirts) for less than 20 bucks (pun intended). One of the sweatshirts features a print of a stylized outline of a buck, with the words “Her Buck.” The other hoodie features a similarly styled outline of a doe, with the words “His Doe.” While it may not, technically, be a couple of flying reindeer depicted on the shirts, the fact that you’re sporting these during Christmastime makes them de facto couple’s Christmas sweaters (although, again, these are sweatshirts). The shirts are black and the fabric is 95 percent poly, five percent Spandex. The hoods do feature drawstrings and there are two big diagonal front pockets They are machine washable.

Buy the Her Buck His Doe Couple’s Christmas Sweaters here.

Read More
Christmas, Fashion, holiday, Shopping
wpDiscuz
0
0
Would love your thoughts, please comment.x
()
x
| Reply
Christmas is about love, you love your other half. Show it with a his and her's Christmas sweater. Check our list: the Top 10 Best Couple's Christmas Sweaters.