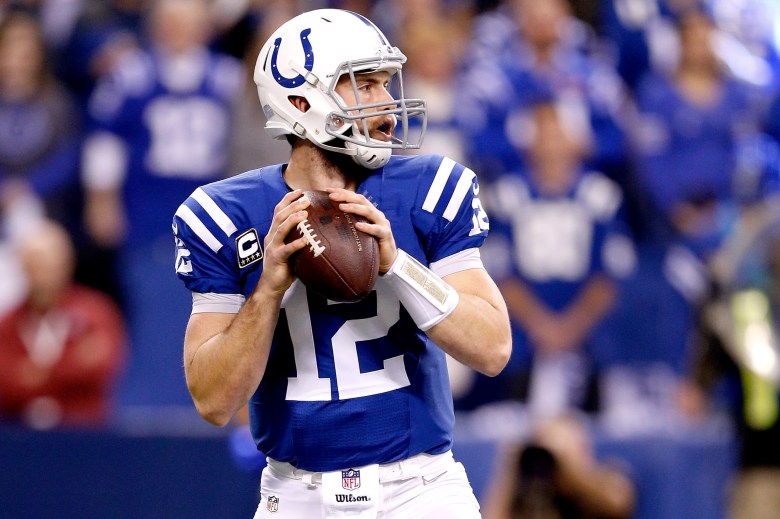 The Indianapolis Colts defeated the Cincinnati Bengals 26-10, and will go to Denver next week to take on the Broncos.

The Bengals were never quite able to get their offense going, with Dalton going 18-34 with 155 yards. Their defense also could not keep up with Andrew Luck, who threw for 376 yards. T.Y. Hilton had 103 yards receiving, while Dan Herron had a combined 141 yards from scrimmage rushing and receiving.

Down two scores, the Bengals were driving in the hopes of a last minute comeback. But in Colts territory, Jerrell Freeman knocked the ball out of Andy Dalton’s hands and Indianapolis recovered the fumble. It was the first turnover for the Bengals. 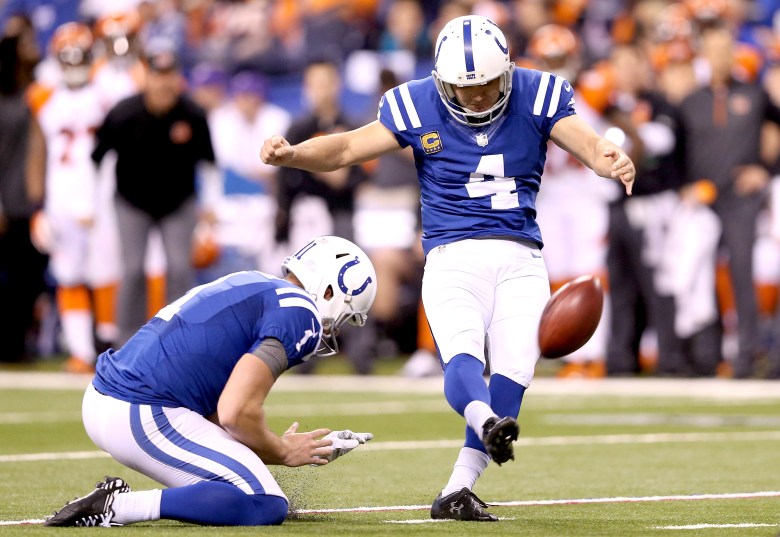 Adam Vinatieri is the oldest player in the league; don’t tell him that. The veteran of all veterans kicked his fourth field goal of the day, this one being a 53 yarder.

Vinatieri Hit His Third Field Goal of the Day

The Colts just keep driving the ball against the Bengals. Despite being stopped at the 4, the Colts got three more points to make it a 13 point lead.

The Bengals defense is struggling to keep up with Andrew Luck. He’s already thrown for over 300 yards, his latest throw being a fantastic 38 yard pass to Donte Moncrief for a touchdown. The Bengals are down by 10, and they’ll need to step it up on both sides of the ball to come back.

Kicking a 57 yard field goal is difficult in any setting, so it’s even more incredible to see Mike Nugent kick one in the playoffs. It was a career long for Nugent, and it cut the Colts lead to just three points, crucial for the Bengals as they get the ball to start the second half.

The Colts were looking for another long drive and a score to cap off the first half. But after Herron caught a 17 yard pass, Bengals CB Darqueze Dennard stripped the ball from him, and fellow Bengal Reggie Nelson picked it up to give Cincinnati the ball.

It’s fair to say Hakeem Nicks has underperformed the past couple of seasons. But he’s also always had a knack for big postseason catches, and he leaped up and made a big 45 yard catch. But a good third down play from the Bengals’ Adam Jones meant the Colts had to settle for another field goal, keeping this a one score game.

The Colts Drive Stalls, But They Still Take the Lead

The Colts had some big plays on the drive that took them into the second quarter, going from their own 9 yard line to the Bengals’ 20. Despite an 18 yard run from Luck, a 30 yard pass to T.Y. Hilton, and a big third down conversion to Hilton on 3rd and 11, the drive stalled at the 20. Adam Vinatieri, the highest scoring player in NFL postseason history, hit a 38 yard field goal to give the Colts a 3 point lead early in the second.

All eyes are on Andy Dalton today to see how he performs. This drive was a good sign for him. Dalton went 3/4 for 46 yards, including a big 26 yard third down conversion to Rex Burkhead. Throw in some nice runs and a touchdown from the Bengals’ breakout rookie RB Jeremy Hill, and we’ve got ourselves a tie game.

Dan Herron Runs the Colts to an Opening Touchdown

With all the talk of Andrew Luck, it’s easy to forget that the Colts actually have other players. One of those is Daniel “Boom” Herron, who nearly single-handedly dragged the Colts to a touchdown. He caught two passes for 26 yards and rushed three times for 32 yards, including a two yard TD run to give the Colts an early lead.

The Cincinnati Bengals take on the Indianapolis Colts, two teams with recent successes looking to make it further in the playoffs after a few years of early exits.

This is the fourth consecutive year the Bengals have made the playoffs, all with Andy Dalton at quarterback. But they’ve lost in their first games each of the last three seasons, and Dalton hasn’t played well in any of them. He’ll look to shake off his one-and-done reputation, but it’ll be difficult; star Bengals WR A.J. Green was ruled out of this game with a concussion. Cincinnati is hoping this goes better than it did on October 19th, where they lost to the Colts 27-0.

The Colts have made three consecutive playoff appearances and two consecutive AFC South Division titles, and look to continue their offensive dominance in the playoffs. The Colts were third in the league in yards per game and sixth in points per game, despite very little in the way of a run game. This of course is thanks to their young quarterback Andrew Luck, who threw for over 4,700 yards and led the league with 40 touchdown passes. Luck’s had an incredible year, but threw 7 interceptions in two playoff games last year and looks to limit his turnovers.

Keep it here for highlights and score updates throughout the game.

Read More
Cincinnati Bengals, Football, Indianapolis Colts, NFL
Keep it here for highlights and score updates as the Bengals take on the Colts.