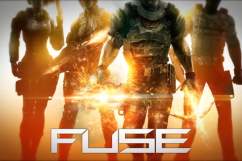 In the not-so-far-off future, a classified government facility is hard at work on harboring the abilities of an alien energy source called “Fuse.” This form of energy is volatile, but the government finds a way to make it work to their advantage. This process doesn’t go unnoticed, as a rouge paramilitary regime (Raven) tries to steal the “Fuse” element and use it for their own nefarious means.

Knowing the potential threat of Raven getting its filthy hands on some “Fuse,” the CIA sends in a small independent contact team to stop them – Overstrike 9 (which just so happens to be the original name of this game). From this point forward, you take control of four agents – Dalton Brooks, Isabelle “Izzy” Sinclair, Jacob Kimble, and Naya Deveraux. Their mission to stop Raven from gaining control of “Fuse” starts out as their sole goal, but an even more sinister threat comes to light afterwards.

The overall plot for Fuse isn’t exactly original, but you won’t pay much attention to it anyway. However, there are some interesting portions of the game that offer some background history on each member of Overstrike 9. You’ll find out the former positions and occupations each member filled before they joined the team, plus you’ll get a glimpse at some of the darker moments of their lives. This helps the game’s narrative grow from its generic “stop the bad guys from using a powerful weapon on the world” storyline.

Insomniac once developed this shooter with a heavier focus on more humorous moments. It’s not hard to see the game’s change in tone, as there are less laugh out loud moments and more serious minded plot sequences. That’s not to say that all the humor has been wiped away, though. During some of the less chaotic moments of the game, your squad will engage in short conversations and offer some funny quips here and there. You may even start to care about this team as you listen to them banter on about saving senators (or not) and punking out nerds for vital information.

If you haven’t been living under Plymouth Rock, then you should have a clue about how today’s third-person shooters control and act. You won’t have to relearn anything here, as your usual shooting mechanics (aiming down the sights, taking cover, flinging grenades etc.) are all present. Another aspect of this cover-based shooter that’s readily familiar are the visuals and character design. You’ll run into groups of heavily armored grunts who are simply expendable canon fodder. As for the members of Overstrike 9, they fit their stereotypes quite well (the wise cracking grunt, the super serious (former) police detective etc.).

The creators of Fuse know that there are way too many generic first person and third person shooters flooding the video game market. That sentiment is clearly evident, as Insomniac added something that makes this game stand out from the rest – weapons that are tied to specific members of your squad. The Fuse powered weaponry provides the X-Factor this game needs. You’ll get access to your usual offering of guns (machine guns, sniper rifles, shotguns etc.), but most of the fun comes from utilizing each character’s special firearm.

The Shattergun crystallizes and freezes enemies in place. The Magsheild projects a Fuse shield, plus it can emit a shockwave blast. The Warp Rifle turns foes into walking time bombs, while the Arcshot fires off crossbows that burn enemies until their extra crispy. Using these weapons more skillfully plays into the co-op portions of your playtime. For instance, you can take aim behind the Magshield’s defenses and litter enemies with shots from the Shattergun. Nabbing some extra points from a well executed co-op kill is satisfying.

As for the rest of the co-op experience, it’s definitely worth taking on with a group of tolerable gamer buddies. Fuse isn’t extremely difficult, but things tend to get a bit hectic if you don’t adopt some strong teamwork. The presence of team combos and team perks make the multiplayer option more rewarding than single player. However, you can go solo and still have a great time. The “Leap” ability allows you to pick one of the four Overstrike 9 members during a mission at anytime. Playing with each character helps unlock new skills that apply only to them, but are beneficial for the entire team. Both options of play are worth exploring.

You’ll spend the majority of your time in this game shooting down an entire room full of baddies, hacking doors, and searching for extra team experience and Fuse credits. Thankfully, things change up from time to time due to big boss fights, brief platforming sections, and stealth sequences. Fuse makes sure to keep you on your toes by changing up your missions and locales. One minute you’ll be teaming up with a mechanized Prowler as you take down a secret facility. Next thing you know, you’ll be breaking necks and stabbing soldiers without setting off ant alarms on a sunny island in India. As soon as you’ll start to tire of your current surroundings, the mission will come to an end and you’ll set off to an entirely new location.

The past aesthetics and mood of this game changed, which kind of hurts the final product. Instead of the Pixar-esque graphical presentation, everyone and everything looks a bit plain in comparison to its past self. The visuals are fine, but they lack a differentiating factor that helps the game from obtaining a look all its own. You probably won’t worry too much about what the game looks like, thanks to its solid bouts of shooting and engaging team-centric take downs. Speaking of team centric, the game’s “Horde”-like mode (Echelon) is a cool addition. Instead of just downing every bad guy that surfaces, you and your friends will be tasked with protecting important strongholds and killing high value targets. This helps keep Echelon fresh on every playthrough.

Fuse is fun, but that fun factor takes a hit sometimes. The friendly A.I. has its fair share of problems at times (they take forever and a day to come heal you, plus they regularly run into your line of fire.) They hold up their part well at times, but too many A.I. hiccups will push you to enlist real people for your campaign playthrough. The cover system is a bit wonky, due to the fact that you have two separate buttons for running and sticking to enemy cover. Having one button to turn to for quickly running and sticking to cover would simplify matters greatly.

After everything was said and done though, I had a great time with Fuse. There were moments where I genuinely cared about my team, laughed at their random banter, and engaged in massive firefights. Although this shooter’s plot and somewhat generic aesthetic may put some gamers off, you’d do best not to ignore this solid release from the makers of the Ratchet and Clank series.

Fuse employs the eccentric weaponry that Insomniac is known for in its catalog of games, as well as the tight gunplay and awesome co-op play modes. Its plain Jane graphic design, flawed A.I., screwy cover system, and ho-hum plot threadings do the game a disservice. But you’ll still enjoy your time with this latest third-person frag fest. Bring friends to this sci-fi ride. 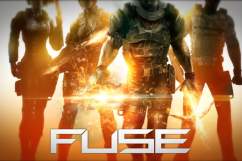 Fuse: Game Trailers and Gameplay Videos You Need to See