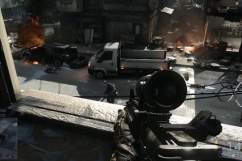 Battlefield 4: Game Trailers and Gameplay Videos You Need to See

One of the most highly anticipated first-person shooters of 2013 has finally been released into the gaming wild. Battlefield 4, which is available on the Xbox 360/PS3/PC, offers players a world spanning single player campaign and the explosive multiplayer the series is renowned for. The reviews are officially in.

So what’s the overall verdict towards EA’s latest entry in its epic military FPS series? Is the single-player campaign much improved over the one from Battlefield 3? Does the multiplayer continue to hold up?

Check out our reviews roundup below.

The current-gen version of Battlefield 4 isn’t the ideal way to play, but it isn’t damaged or deficient despite its limitations. It accomplishes less than you’ll see on other platforms, but it’s still a great multiplayer shooter that makes the most of its ambitions. DICE proves once again that destruction is a valuable strategic addition to competitive combat, even when it’s a little ugly, and that battle reaches its full potential with two killer Commanders are bringing out the best in their squads. The campaign, on the other hand is a disappointing, but functioning and familiar game with overwhelming action and remarkable spectacle.

Unsurprisingly, the PC version remains on top with excellent visuals and sprawling 64-player matches that make the most of the great maps and incredible combat diversity. The PlayStation 4 version joins the PC in the top tier, with comparable visuals and 64-player matches to boot. The Xbox 360 and PlayStation 3 versions still deliver solid visuals and exciting online play, but with matches limited to 24 players at the most, current gen already feels like last gen. Texture pop-in delays are much more noticeable in the PS3 version, making it the least appealing of the bunch.

Regardless of platform, Battlefield 4 multiplayer is a blast and definitely the best reason to return to this hallowed franchise or dive in for the first time. Though the campaign makes strides in the right direction, it remains a sideshow to the main event. Expansive and exciting, challenging and empowering, Battlefield 4 multiplayer is a thrilling endeavor in this generation or the next.

The 10 new maps deliver a nice variety of environments. During any given mission, you wind through urban streets, roll through fields in a tank, and make amphibious assaults via boats. Each level features a “Levolution moment,” which is essentially an opportunity for DICE to showcase its technical prowess. The quality of these experiences wavers from impressive to gimmicky. When the tsunami kicks up in Paracel Storm it makes shooting from boats much more challenging, testing the skills of the best machine gunners. In other levels, I wish DICE had left the maps alone. Watching a skyscraper fall is cool the first time, but as you play more matches in Siege of Shanghai, you realize the map is so much better with the tower standing tall. Some of these fallen buildings are also tough to navigate, as your soldier often gets caught on the awkward geometry.

Battlefield 4 doesn’t advance the series in any significant way, but the subtle improvements provide enough incentive for multiplayer fans to invest heavily in the land, air, and sea battles. Given the underwhelming performance of yet another story campaign, maybe DICE was on to something in ignoring single-player altogether in Battlefield 1942. Imagine what the studio could do if it invested all that manpower into making its already good multiplayer experience even better. 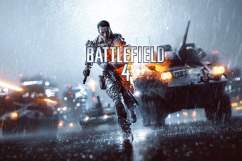 Multiplayer, unsurprisingly, remains the main draw, presenting a new iteration of DICE’s large-scale combat anchored by incremental improvements focused on better squad play. Players assume one of four classes and battle across ten maps, each tailoring itself to the specific mode being played. For example, Hainan Resort, a map composed of a series of tropical islands, will only open up a portion of itself for matches of Squad Deathmatch or Domination, but all of its many islands are utilized when playing Conquest and its 64-player PC variant, Conquest Large.

The main draw for the Battlefield series has always been the chaotic camaraderie of its multiplayer, and that’s no different here. But the sum of Battlefield 4’s parts shows that DICE is capable of more. Not only has the developer iterated on and progressed its marquee multiplayer, it’s provided a tight and cohesive campaign that is everything a military shooter needs to be.

Other shiny new features come in the form of map-revamping “Levolution,” which breathes new life into large-scale skirmishes, as well as Commander and Defuse modes. Levolution (DICE’s buzzword for real-time map changes) involves alterations both big and small: it can be tiny, like gate doors closing and locking deep in the catacombs of a mountain prison, or massive, like a towering skyscraper crumbling onto the streets of Shanghai. In practice, the addition of dynamic environments often transforms the scale and scope of a battle — by, say, turning close-quarters firefights into small-scale naval warfare, thanks to a few key rocket blasts destroying a levee — and keeps tension deliciously high.

Despite our minor gripes, Battlefield 4’s multiplayer suite feels as tight and varied as ever, and delivers exactly the kind of tactical chaos we expect from the vehicle-driven shooter. Unlike last year’s installment, though, multiplayer excellence can’t completely compensate for a misguided and rote single-player campaign, which makes BF4 an unsatisfying choice for those looking for the total package. Even so, its online offerings remain impressive, and you’ll find us demolishing that tower in Shanghai (preferably with friends inside) over and over until it’s finally time to upgrade to Battlefield 5. See you on the battlefield.

Battlefield 4 also manages to take small lessons from other faster shooters. While Conquest, the objective-based multi-point capture mode on large, vehicle-laden maps, is still the star of the show, the addition of a dedicated, infantry only variation called Domination is often inspired. One match on the prison compound of Operation Locker may have been the most fun I’ve ever had with a Battlefield game. As each team smashed against each other head-on, or flanked from above, or below or the sides, it emphasized shooting that’s never worked as well as it does here.

DICE has failed once again to make Battlefield 4 a serious single-player contender. But its emphasis on ambitious, team-based multiplayer does wonders to wash the taste of that failure away. Battlefield 4 takes the elements that have made each installment work and glues them together successfully — even if some rough edges show here or there.

There are some sour notes. Defuse, a new 5v5, one-life-per-round mode, designed to draw in the Counter-Strike crowd, falls flat because it puts tense twitch-shooting ahead of smart tactics and specialized warfare. Seriously, if you want to camp in the corner of a room for 10 minutes a) fuck off–that’s not how Battlefield works, and b) you could always play Call of Duty for that kind of nonsense–I’ll be enjoying Conquest, thanks. Commander mode is… a little dull. It’s a novelty to tactically influence the battle from a bird’s eye view, but when I sat there tapping away at my iPad, I was desperately wishing to be part of the battle down below.

Overall, multiplayer feels quicker and more aggressive, although–don’t worry–Battlefield 4 hasn’t turned into a COD-style twitch shooter. Classes are well balanced, and as far as I could see (and I played for hours with everything unlocked), there was no super-gun / kit that lets you murder everyone. And again, there’s no single class that dominates any single map–there’s room for everyone during each session.