After announcing the Valve Steam Controller a few weeks ago, the first demo for the device has appeared on the company’s personal YouTube page. While the video does not provide important information such as how it feels (remember that it has no joysticks but touch-pads) but this is the best sneak peek we’ve gotten so far.

Emphasizing its focus on computer games, the demonstration rolls through a number of Valve’s own titles with an image of the controller in the bottom corner. A few lucky winners have been able to test the controller out early but the actual release date is set for next year. Although this does look fun to play, we still need a little more info on the actual performance and feel still. 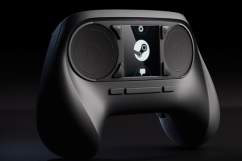