One of the major fighting games that stole the show is Ed Boon and NetherRealm Studios’ upcoming Mortal Kombat X. Not only did gamers get to see it in action, but they also got to listen in on while Boon supplied more details on the characters and story.

Here’s every bit of important info that you need to know about from Mortal Kombat X’s E3 2014 showcase.

1. The 1st Bit of Gameplay Was Shown During Sony PlayStation’s E3 2014 Press Conference

Sony’s E3 2014 press conference was full of some awesome footage of their upcoming slate of video games. Mortal Kombat X got a moment to wow the audience on the big screen and gave everyone a closer look at its actual gameplay. This extra gruesome trailer showed Scorpion, Sub-Zero and two other new combatants (kombatants?) duking it out. As expected, the darker art style and brutal scenes made a huge impression on fans and even non-fans alike. Weapons were used, environmental attacks were seen and all types of new moves can be seen throughout this nice look at what Mortal Kombat X is serving up in 2015.

After Sony’s livestream concluded, they invited Ed Boon to their 2nd day of E3 2014 coverage. The video posted above was an extra lengthy demo that was full of surprising reveals and the info fans have been waiting for. Check out the full 13-minute video above and prepare to cringe.

The video you’ll watch above features the rest of the cringe-worthy Fatalities that popped up during Mortal Kombat X’s E3 2014 demos.

3. A Bunch of New Fighters Were Revealed

Some of the new fighters who were revealed include Cassie Cage (the daughter of MK vets Johnny Cage and Sonya Blade), Kotal Khan (the green skinned demon), D’Vorah (the half-human/half-insect female) and Torr/Ferra (the massive brute/little lady combination character). You can see each of those debuting fighters in the character selection screenshots above.

4. Three Separate Versions of the Same Character Will Be Included in the Game

Ed Boon made sure to explain one of the newer mechanics of the game – one character will be able to use one of their three fighting variations. For instance, Scorpion’s “Ninjutsu” mode gives him access to attacks that let him use his dual blades. D’vorah’s “Brood Mother” fighting style lets her use two specific special maneuvers (Krawler and Bug Blast).

5. The Game’s Placing in the Mortal Kombat Universe was Explained

As for when Mortal Kombat X takes place, it reportedly occurs 25 years into the future after the events of Mortal Kombat (2011). Ed Boon hinted at something huge that fans won’t be expecting, too – the return of a main bad guy to the roster, aged versions of past fighters and a bunch of new characters. 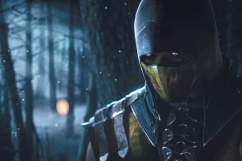