Zombie games are a stable in the wonderful world of video games, and 2016’s release schedule shows that zombie games are still as popular as ever. We’ve got 6 upcoming zombie games in queue for 2016, and some of them look truly great. And even the ones that don’t look “great” will still be good, because, well, they’re still zombie games. Games starring our undead friends have come a long way since the 90s, when games like Zombie Nation, Zombies Ate My Neighbors and Corpse Killer invaded our living rooms — during the hay day of zombie culture. And hopefully, we’ll see more zombie games revealed at E3 2016. So if you’re into killing zeds, zombies, walkers, undeads, biters, the risen, the living dead, or z’s, and want to do so this year, we’ve got you covered.

So without further ado, here is the list of upcoming zombie games that have been confirmed for 2016 or later:

Note: Before writing this list, Dying Light’s The Following expansion was released, and it is one of our top 10 best PS4 games of 2016 so far:

Although we were given a taste of Telltale’s The Walking Dead with a Michonne-themed episode earlier this year, we know that Telltale Games is deep in development for the highly anticipated The Walking Dead Season 3. We don’t have any details just yet, other than the fact that they’re working on it.

H1Z1 is a survival MMO sandbox game that is set shortly after a zombie apocalypse in the United States, pitting players against the undead, nature and thousands of hostile survivors. It’s an obvious play on the H1N1 virus, as players will fight off the H1Z1 virus. You’ll be required to interact with other players, scavenge for valuable resources, build your own shelters and craft. It’s basically SOE’s attempt at a DayZ or State of Decay MMO. It will be free-to-play, and it hit Steam’s Early Access on January 15 of last year. H1Z1 is the unforgiving game we hoped it would be, with a great blend of action and RPG elements. Now, it’s split into two separate games, one for the survival experience, and the other for a multiplayer Battle Royale experience.

We’re hoping that Dead Island 2 doesn’t turn out to be just a prettier Dead Island. Hopefully, Dead Island 2 will have more substance. The game will take place in California, allowing players to even kill zombies in Hollywood (please let there be some formerly famous undead — a zombie Megan Fox? Yes, please). According to Yager, the game will feature a new massive world to do your zed killing in. Dead Island 2 will feature different combat mechanics than its predecessors, although some other gameplay mechanics will return. It will undoubtedly be a hot seller, given the franchise, and hopefully Yager will make Dead Island 2 what the original Dead Island should have been.

Human Element is being developed by Robert Bowling, the former Infinity Ward man that left after Modern Warfare 3 to form Robotoki. When first announcing the game, Bowling teased, “What is the greatest threat in a zombie apocalypse?” Bowling believes it is the fear created by the zombies that cause otherwise normal people to do whatever it takes to survive. The game begins 35 years after the zombie apocalypse begins, and places an emphasis on surviving against other players (a recurring theme in zombie games of the past few years). It’s currently on hiatus, but since the game was so deep in development before Robotoki shut down, it’s possible we could see another developer/publisher pick it up.

Killing Floor 2 is finally coming this year, and every PC gamer is excited. Players fight through waves and waves against zombie-like humanoids called Zeds. And, it’ll all be running at 60fps. The game was released to Early Access in April 2015, and we’re hoping it’ll get a full retail release later this year.

We were given confirmation late last year that Resident Evil 2 would get an HD remake, and that’s just about all we know about it right now.

Just yesterday, in fact, Capcom dropped a trailer (above) that revealed that Resident Evil 4, 5, and 6 remakes are on the way for the PS4, Xbox One and PC. We’re not sure exactly how many Resident Evil remakes we actually need in our lives, but this is a list of ALL of the upcoming zombie games (which includes these). 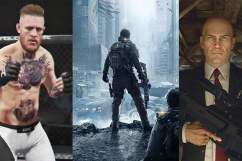