It has already been one of the biggest gaming news mornings of the year so far, as not only did we receive a brand new Nintendo Switch teaser, but Rockstar Games has also just released the very first Red Dead Redemption 2 trailer, as they promised they’d do yesterday.

But before you get too excited, we warn you that you should probably temper those expectations, as the trailer is just 90 seconds long. Admittedly, it’s 90 seconds of an absolutely gorgeous world that’s notably a major step up from the world of its predecessor, but it’s still a bit disappointing that it doesn’t give us much information about what the game will actually be.

We know that there will be a Red Dead Online of sorts included with the game, in the style of GTA Online, of course. But as far as any other official information is concerned, the trailer gives us very, very little.

Still, it sure does look pretty. And not pretty in a general sense, but exceptionally pretty. Environments look dense and have exceptional clarity, characters appear nearly photo-realistic, and the number animals shown in the trailer all look great.

We’ll undoubtedly have more information surrounding Red Dead Redemption 2 soon, but for now, we don’t know much other than the fact that it’s coming Fall 2017 for the PS4 and Xbox One.

For more of the latest gaming news, stay tuned to Heavy.com. 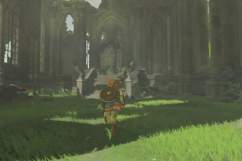 WATCH: New ‘The Legend of Zelda: Breath of the Wild’ Gameplay Trailer