Several new Pokemon have been added to Pokemon Go as of Monday, December 12th. They are only available through hatching, but can these creatures be hatched from eggs that players had in their inventory prior to December 12th? Or do the eggs themselves have to be new as well?

Unfortunately, these additional creatures will only spawn from eggs that were obtained after the launch of the new Pokemon. If you have any eggs that you picked up prior to December 12th, you will not be able to get the newly-added Pokemon from them.

That’s because contrary to what you might think, the product of a Pokemon Go egg is not actually determined the moment you hatch it. Rather, it seems that this is determined from the moment you pick up the egg, and it’s just that you don’t find out what’s inside until hatching occurs.

It became clear that this was the case the last time Niantic made a major update that affected the hatching of eggs. When the company altered which Pokemon could be hatched from which type of eggs, trainers were immediately confused that they still were hatching Pokemon in a way that contradicted the new distribution rules. This was happening because gamers were hatching eggs they had obtained prior to the update, and so those eggs were therefore not affected by the update.

It’s for this reason that you aren’t seeing dozens of dozens of pictures of the new Pokemon flooding social media quite yet. If trainers could simply finish off the eggs they have, hatch them and get new Pokemon, that would be simple enough. But instead, they have to go out there and get some new eggs, proceed to walk several kilometers, and just cross their fingers hoping that they’ll happen to get a new baby Pokemon.

So far, it has been confirmed that Togepi, Pichum Igglybuff and Cleffa are currently obtainable. It has been speculated that many of the other baby Pokemon are available, but those four are the only ones that we know for sure are in the app now.

Here are some photos of the few baby Pokemon that players have managed to obtain so far: 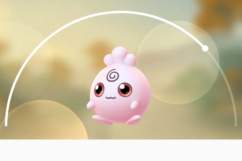 Read more about the new Pokemon Go eggs and species in Spanish at AhoraMismo.com: