Correction: The Centurion is modeled after Roman gladiators. I previously said they were modeled after Greek ones. There aren’t any gladiators in Greece. Apologies to anyone offended. It’s all Greek to me.

For Honor Is getting two new heroes, the Shinobi and Centurion.

The Shinobi joins the Samurai faction. They wield two kusarigamas (basically a chain whip with a weight on one end and a sickle on the other) and specialize in fast, close and long range attacks that can grapple opponents. They can also warp around the battlefield and strike opponents.

The Centurion joins the Knight faction. Modeled after Roman gladiators, they fight with a gladius (a short sword) as well as their fists for flashy close combat attacks.

Season two of For Honor, “Shadow & Might,” starts May 16 and adds new maps and other content to the game, including the two new heroes. Ubisoft is planning a livestream on the game’s Twitch channel on May 15 for the world premiere of season two which includes a tournament with 16 players. 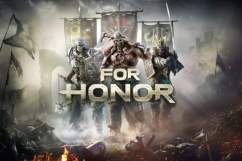