Ever since Injustice 2 was announced, we’ve known that one of the 1st DLC bonus characters is the all-powerful Darkseid.

Now we know who else is on the way. Today (May 5), a new trailer hit the web and it details the game’s “Fighter Pack #1’s” trio of super-powered entrants. First up is Red Hood, Batman’s 2nd iteration of Robin who was killed by The Joker. After being revived, Jason Todd decided to adopt his new Red Hood alias. The next character to be revealed is Tamaran’s royal exile and trusted member of the Teen Titans, Starfire. As for the next individual who’s set to enter the world of Injustice 2, it’s actually going to be a Mortal Kombat character. Scorpion was in the last game, but this time Sub-Zero will be the one to take his spot in the sequel. These three characters come with the Fighter Pack #1, while everyone who bought the “Ultimate Edition” of the game will get six extra fighters.

Judging by the picture posted above, it looks like we’re going to see Black Manta and Raiden pop up as extra DLC characters. We’re still hoping Spawn eventually gets the OK to join the game’s roster. 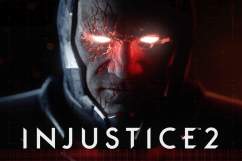