A new character, Max Brass, has been revealed for ARMS and is coming to the game through free DLC.

According to GoNintendo, Max Brass is the greatest champion in the history of the ARMS Grand Prix and his arms are made out of championship belts. He’s also the head of the ARMS League and the organizer of the tournament your character fights through in the campaign.

Max Brass can grow his entire upper body while charging and not flinch when hit, according to Polygon. If your health gets below a quarter, your arms will be permanently charged.

Max Brass is also the final boss of the campaign.

Max Brass will be joining #ARMS next month as free DLC! pic.twitter.com/2TVuBjeJSA

Spectator mode is coming to the game via the first update this month. Max Brass will be coming in the second update next month. ARMS will receive free updates with new weapons, arenas, and characters throughout its lifespan.

The game was shown off during the Nintendo Treehouse livestream for E3 2017. The ARMS Open Invitational was also held during E3 where pro players were invited to duke it out for the championship.

Nintendo also gave players a chance to try out the game early with the ARMS Global Testpunch, where they could play the game’s online Party Match mode and try out many different kinds of match types including regular matches and even volleyball.

Max Brass is just one of the characters in ARMS. Here’s the full list from Nintendo of all the confirmed characters so far:

– Spring Man: This passionate fighter’s bouncy hairstyle might look fake, but his passion for fighting is definitely real.

– Ninjara: Using his nimble movements and ancient ninjutsu, Ninjara can disappear and warp somewhere else even in mid-air or when guarding.

– Master Mummy: As the only character that can restore health while guarding, Master Mummy is a force to be reckoned with.

– Kid Cobra: A fan of selfie sticks and livestreaming, this hip fighter pounces on opponents with a charged-up dash.

– Helix: Who is Helix? He’s an experiment gone wrong, that’s who. His springy body lets him move in unpredictable ways.

– Mechanica: This mechanical genius dons a homemade power suit that can hover above the competition.

– Byte & Barq: Two fighters in one! This robot fighter and his robot canine companion battle together to unleash devastating combo attacks.

– Twintelle: As an A-list actress, Twintelle uses her celebrity status to render her opponents utterly star struck as she walks the red carpet to victory.

ARMS is releasing this Friday, June 16, 2017 on Nintendo Switch. 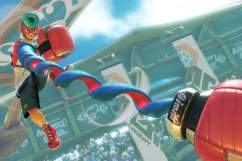 ‘ARMS’ Global Test Impressions: How Is the Game So Far?