Share via E-mail Share on WhatsApp
Speedrunning has taken the world by storm over recent years. A quick glance at Twitch and you’ll see many streamers attempting speeds runs but you don’t see many tackling a roughly 20 hour game like Prey and beating in seven minutes.

The video shows us essentially how to glitch our way through Prey. Bethesda titles have been quite prone to bugs over the years, especially the Fallout series, but it looks like Prey takes it to the next level if this video is anything to go by. When we saw the run start with the player climbing through the ceiling, we knew we were in for a treat.

The run was uploaded to YouTube by Seeker TV and you can catch his Twitch streams here.

The most impressive thing to us about the video was the fact that load screens made up a good chunk of it. The record, now the world record, didn’t take into account the load screens during the run so the current record for Prey sits a 6:59, a very impressive number, especially for a game that has been out for little over a month. However, doing a speedrun doesn’t give you a chance to take in the game’s beautifully designed environments and enemies. Instead, we get to see what the inside of walls and the outside of the maps look like.

We were pretty big fans of Prey and we’re glad to see speedrunners give it more life. Here’s what we had to say in our review last month:

Arkane Studios had a lot to prove since the cancellation of Prey 2, and they have more than demonstrated that they were up to the task. While Prey is flawed, most of my complaints boil down to wishing that the game was even more brilliant overall than it already is. Though not as groundbreaking as its inspirations, Prey’s immersive and clever environments and gameplay grows on you like an alien virus. 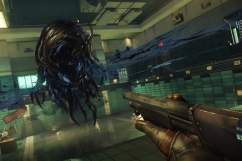 ‘Prey’ Boss Guide: How to Defeat Telepaths and Technopaths

Read More
PC Games, Prey, PS4, Xbox One
And you thought the bugs in Fallout 4 were bad.