During last weekend’s Comic Con, we got a glimpse at Starfire as she was expected to be the next addition into Injustice 2.

Today, the official Injustice 2 twitter page and Ed Boon have both teased Bizarro, one of Superman’s greatest foes. This will probably just end up being a premiere skin for Superman and not actually a new character, but stranger things have certainly happened. We don’t really have much share since all that came with the tease was “Bizarro number one, not Superman!” which doesn’t really seem like Bizarro dialogue but we digress.

We actually got a look at Bizarro in the Starfire gameplay trailer for a brief second. One of the things that makes Bizarro interesting is that all of his powers are reversed from Superman. This means that he has frost vision and heat breath, among some of the more common powers.

As much as we’d like to see him as an actual character, we just don’t see that being the case here. This would have been a huge announcement to come out of the blue but it’s still nice to see him enter the game in some form. We still don’t know for sure who all the DLC characters so there’s always a chance. At the very least, we’d like to see him have some unique Bizarro dialogue instead of just repeating Superman’s lines if he is just a skin.

NetherRealm Studios has already added a couple characters into the game via DLC so far. The first of them was Red Hood back in June, Mortal Kombat’s Sub-Zero this month, and now we have Starfire set to release some time next month. It’s a good time to be an Injustice 2 fan.

Injustice 2 is available now for Xbox One and PS4. There is no PC version as of yet but we suspect it’ll be coming eventually.

If you’re looking for how to unlock the rest of the premiere skins in the game, you have to look no further. You can read our guide on how to do so right here. Hopefully Bizarro will be joining the list in the near future. 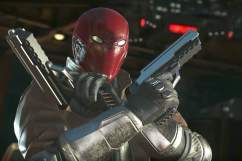