As it was announced at E3, Minecraft and Microsoft are pushing cross-platform play with Minecraft. The idea of this is to unify the worlds across all platforms to make the world even bigger. Having more players playing is not a bad thing.

For example, this will allow players playing on an Android phone to play with users on an Xbox One or even a PC. The unifying of platforms is a big leap for Minecraft going forward.

The new update enters beta today but it will not be available for every platform right away. As for right now, we’re looking at a beta for Windows 10 PC and Android devices. This means that if you are beta testing the update, Windows 10 players will be able to play in the same worlds as those using Android devices. An update is coming in the near future that will open up the beta to Xbox One players.

In order to participate in the beta on Xbox One, you have to own a digital copy of Minecraft: Xbox One Edition and Android owners will need to own a copy through the Google Play store. Xbox One and Windows 10 PC players will also need to have downloaded the Xbox insider app and follow these steps to enjoy the beta:

If you’re interested in joining the beta on an Android device, head here.

The Better Together update isn’t just bringing cross-play either. A bevy of new features will be included with the update including stained glass, fireworks, parrots that dance, customizable banners, armor stands, jukebox and music discs, recipe book and ravines.  the ability for players to share their creations in 3D by uploading 3D models from the game directly to Remix3D.com will also be added.

Unfortunately, since the PS4 is not part of the cross-play feature, players on Sony’s console will be stuck with playing with only PS4 players. This isn’t a horrible thing since the playerbase on PS4 is still very large, but there’s nothing wrong with it growing even further. As for right now, this update is confirmed for the consoles participating in the cross-platform play and PS4 is not currently one of those consoles. This leaves us unsure of when or if the PS4 would receive the features included in this update.

With the update entering beta today, we appear to be closer to a full-blown release of the update. Although no release date has been given, we’re optimistic that it’ll be soon. 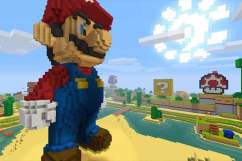