Microsoft made a stunning announcement during yesterday’s Age of Empires live stream at Gamescom. While big news was teased about the franchise at E3 earlier this year it’s likely that many fans didn’t really expect an announcement this big.

Age of Empires 4 closed out the stream yesterday with a brief trailer than basically confirmed its existence and showed all of the eras the series has been through so far. If the series follows the trend it has been following that means Age of Empires 4 will take place in more modern times. At this point, it’s interesting to note that Relic Entertainment is the developer of Age of Empires 4. Relic Entertainment is perhaps best known as being the developer of the Company of Heroes series which is a real time strategy game set during World War II.

It’s possible Microsoft decided to take the series into the World War II era and brought on Relic Entertainment since they had prior experience in the genre. Relic also developed The Outfit, an Xbox 360 title set during World War II as well.

Age of Empires IV Announce TrailerIt's time to battle through history once more in the latest entry of the landmark Age of Empires franchise. Learn more: http://wndw.ms/0QSUbC Video with Audio Description here: https://youtu.be/CZxfy5zlbPM2017-08-21T20:00:26.000Z

It’s hard to imagine Age of Empires being set in modern times but it makes sense with the direction the series is going. A reboot of the series could have been considered but with the announcement of Age of Empires 2 and 3 receiving Definitive Editions pretty much put that possibility to rest. It’s also possible the series will follow a similar route of the Civilization series in that it meshes all kinds of eras together but does a good job of balancing them.

Another interesting thing to note is how Age of Empires II still has a very strong following and even has an HD version on Steam. We don’t know what will happen to the HD Edition now especially since it has even received a few new expansions that have added more content to the game. Age of Empires III introduced “Home Cities” and RPG elements to the series so it’ll be interesting to see whether Microsoft and Relic scrap that idea in favor of a return to how the series once was.

It’s to hard to say for certain about where the series is going from here since we’re only a day removed from knowing it even exists. There’s one thing for certain and that’s that fans have waited far too long for another entry in this storied franchise. Age of Empires 4 is coming as a Windows 10 exclusive – sorry Xbox owners. 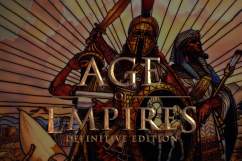 Read More
PC Games
Let's take a look at what era Age of Empires 4 might be in.