The idea of Batman has been tackled in many different ways, ranging from books, TV shows, movies and video games. Most of times, we know how things will play out such as how the Joker is always a villain, Vicki Vale is always the reporter with a thing for Batman, etc. However, with Batman: The Telltale Series, all of those things have been thrown out the window for something fresh.

In the follow-up to the 2016 game, Batman: The Enemy Within further takes what you may know about the existing characters and erases it further. Sure, the villain of this episode is The Riddler and he is always a villain but that doesn’t mean you don’t have to take a step back and closely examine every relationship Bruce Wayne/Batman has with other people.

This constant struggle between who to trust and who not to trust is what makes Batman: The Enemy Within such as good time. The game takes the choices you made in the first series and carries them over to this game so it’s good if you started with that one first. If you haven’t played the first series you will still be able to create your own backstory in order to make the story fully yours.

The events of this episode unfold a year after the original series wrapped up with Lady Arkham having been defeated and crime in Gotham dropped to a record low. However, we know Gotham City can’t be without crime for too long and it returns in the form of The Riddler. The game starts out and puts you right into the action as Batman as you attempt to take down the puzzling villain. Be known that some of the fights in this episode can get a little gruesome. After this encounter, we are greeted by another character from the DC Comics mythos in Amanda Waller. I suspect she’ll have a big role in this game going forward.

I’ve found that the best times I’ve had with this episode were my times as Batman, which I was wanted more of. Many games don’t really explore the idea of Bruce Wayne a whole lot so it’s nice to see Telltale take a stab at it. Some players may enjoy the Bruce Wayne segments and it’s not like they’re bad, I just wanted more Batman. The episode starts with such a strong note that I felt let down progressing through the Bruce Wayne parts. However, a meeting with an old friend that you may or may not owe a favor to highlights the high point of this episode and you are Bruce Wayne for that part.

Your detective work returns from the first series and it’s still just as cool. One thing I’d like to see more of is harder puzzles in the future. The game pretty much solves the puzzles for you which doesn’t really make it feel like you’re doing the work. You still have to link things together but the choices are all pretty obvious so it won’t take you all that long. The scenes still look cool, though.

Performance is still an issue with this game as it has been for Telltale games in the past. Playing on PC, I saw frequent dips from 60 FPS into the mid-30s and it can be a bit jarring to see such fluid motion become choppy for a second or two. It doesn’t make the game unplayable by any means but it is noticeable. Playing with a mouse and keyboard wasn’t the easiest thing to do in this game but I had trouble getting proper controller support with the game. It was most likely a problem on my end so I won’t blame the game for it.

To be completely honest, I enjoyed this episode more than any of the episodes from the first series. I didn’t really care for Lady Arkham as a villain and I felt like more could have been done with The Penguin. I like what has been set up with this first episode and I think it could turn into something even greater down the road. This episode did exactly what it was supposed to do and that is making me ready to play the next one. 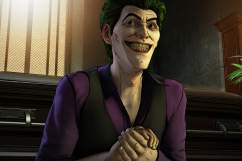