You can finally obtain the mythical pokemon Marshadow for Pokemon Sun and Moon via a code from GameStop.

Codes for the Pokemon will be distributed at GameStop stores from October 9 to 23, according to the official Pokemon website.

The Fighting/Ghost Pokemon was first announced on April 7 on the official Pokemon YouTube channel. According to the official website, the Marshadow you’ll receive will be at level 50 and comes with the moves Close Combat, Force Palm, Shadow Ball, and Spectral Thief. Spectral Thief is a move exclusive to Marshadow which steals the stat boosts of opponents while also doing damage. It also comes with the ability Technician which boosts the power of moves that have a power of 60 or less. Finally, it holds the Marshadium Z which allows it to use its Soul-Stealing 7-Star Strike Z-move.

Here’s how to put it in you Pokemon Sun and Moon game straight from the official website:

3. Select Get with Code/Password, then Yes, and then Yes again to connect to the internet.

5. Watch as you receive Marshadow.

6. Speak to the delivery person in any Pokémon Center to pick up Marshadow.

GameStop is also giving away Salazzle from now till September 4. The level 50 Pokemon has the moves Fake Out, Toxic, Sludge Bomb and Flamethrower as well as the Focus Sash.

Nintendo is also offering players a Rockruff that evolves into Dusk Form Lycanroc for pre-ordering Pokemon Ultra Sun and Ultra Moon between its release date of November 17, 2017 and January 10, 2018. 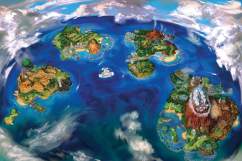