Splatoon 2’s third Splatfest has been revealed and it is probably going to be a lot closer in terms of popularity than the last one that pit ketchup against mayo.

This upcoming Splatfest will make players choose between having the power of invisibility or the power of flight. We figure that will create a bigger debate than choosing between ketchup or mayo. The side Pearl chooses could end up deciding the fight.

This Splatfest will take place on September 1 and run through September 2. If you want to find out the times, just head right here. It will follow the same format of Splatfests in the past and only feature Turf War as players battle it out for their team. Players will be given a shirt beforehand that can be used to fill up with abilities.

A new map called Shifty Station was introduced in the last Splatfest and will likely make a return with the next one. This map is different than others in that it transforms from Splatfest to Splatfest so the map you saw last time won’t be the same map this time around.

Splatfests are one of the big features about Splatoon 2. The battles operate just like a normal Turf War battle, but this time you’re fighting for your chosen side. You select what team you’ll be on in the hub area and then you can either choose the Solo Division or Team Division. The Team Division is used if you want to play with friends as you’ll be ranked with other teams while solo will put you up against other solo players. You can read more about how the Splatfests will operate here.

Since a lot of Splatoon 2’s longevity will depend on these Splatfests, Nintendo has promised to keep them going for at least two years. This gives us Splatfests for twice as long as its predecessor and it will also be a way to keep players interested. On top of the Splatfests, Nintendo is also pumping the game with free DLC long after the launch, giving players more weapons, gear, stages and more. This should come as no surprise since Splatoon was one of the Wii U’s standout titles so Nintendo is building on that with the sequel. 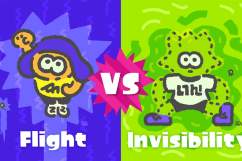 Splatoon 2: When Does the Third Splatfest Begin and End?