In Destiny 2 here are a lot of different currencies and consumables that you will need to manage if you hope to reach a high Light level. However, one of the most curious items you will receive are Emperor Calus Tokens during the Leviathan raid. Previously, Destiny raids never gave anything to players outside of the loot in the actual raid itself. While there were a few notable exceptions, typically new weapons and armor pieces were always given to users after completing activities.

This is still true for the Leviathan raid, however, Bungie has implemented a token and reputation system as well. These items will primarily be earned after completing one of the four major encounters (Baths, Dogs, Gauntlet, and Calus) or when you unlock the hidden chest in the Leviathan’s underbelly. There is no way to farm them and a typical run, plus the chests should net you around two reputation items. Keep in mind these items will not be over your current Light level, so make sure to have some infusing material if you want to use them. 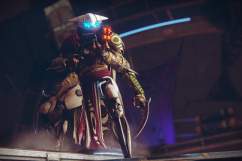 Destiny 2: How to Beat the Exodus Crash Nightfall

To actually turn the Emperor Calus Tokens in, make your way to The Tower after you have beaten the Leviathan raid. Head over to where Ikora Rey is stationed and then turn to your right once you are facing her. Go into the small alcove and then down the stairs into the tunnel system. At the very bottom, you will find the lovely Sweeper Bot named Benedict 99-40.

This will be the vendor you turn over the tokens to, however, he is only accessible after you defeat Calus. It doesn’t matter how many tokens you acquire beforehand, he is only activated with a unique letter given to the player at the end of the raid. Always make sure to open every hidden chest at the end of the raid as this will increase your tokens and allow you to obtain Destiny 2 raid gear that might have been missed.