Destiny 2’s first raid, Leviathan, is almost upon us and many are spending dozens of hours gears up. While much of this raid still remains a mystery, we can now confirm what Light levels will be recommended to players for this activity. Game director Luke Smith took to Twitter today and explained that the raid Light level will be from 260-280. This makes it 20 points higher than the Nightfall and Destiny 2’s hardest activity for players.

Following the same design as the previous game’s raids, Leviathan has an increasing Light level that will become more difficult with each encounter you pass. This is due to all the loot you will acquire that helps improve player’s levels as they progress through the raid.  While the raid itself might start at 260, we highly recommend you be at least 270 for this activity. Being reliant on drops to make you effective in combat is not a sound strategy.

If you are struggling to get beyond 260, consider shifting your focus to obtaining Powerful Engrams via Milestones. These can drastically increase someone’s Light level and give you that much-needed boost. Another method is by farming Heroic Public Events as these have a decent chance to drop Legendary or even Exotic engrams. For a more detailed breakdown on how to power level your Guardian, go here.

Destiny 2: How to Play “The Floor is Lava”

As for the raid itself, not much is known outside of some very mysterious concept art that was shipped with the Collectors Edition of the game. We do know there will be an Exotic weapon thanks to the raid quest Await the World-Eater. There is some speculation that the first raid could be Cabal focused given that’s what appears to be the raid weapon, but arguments could be made for both the Hive and Vex. Given the Cabal is the only faction in the Destiny series to not obtain a raid, this is the most likely choice for the sequels flagship post-game content.

We will know soon enough, as the Destiny 2 raid launches on Wednesday, September 13. 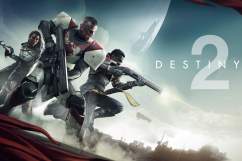