The Coalition The new map, Mercy.

Gears of War 4 is rolling out an extensive update later this month dubbed the September Update. This new update will bring a slew of new features to the game including new maps, achievements and much more.

Two new maps are arriving with this update but one is actually one you’re familiar with. The first one is called Mercy and it is set in the hometown of Dom’s wife. You may remember this map from Gears of War 3. The second map is called Harbor Haze and it features a mist that can come in at any time and lower your visibility. Here’s the official description of each map.

The classic “Gears of War 3” battleground set in the hometown of Dominic Santiago’s wife, Maria, makes its much-anticipated return in Gears of War 4.

Now set in the end stages of winter, the fights you know and love are all here – including the close-quarters pew battles inside the church and the fight to dominate the high ground in the center of the map – playing just like you remember.

The CoalitionThe mist rolling in on Harbor Haze.

Prepare for nerve-shaking combat in Harbor Haze! This new take on Harbor is set during the day, and introduces a brand-new mist mechanic that envelopes the battlefield.

The mist can roll in from the sea at any time, dramatically reducing visibility and providing the perfect opportunity for surprise attacks or sneaky flanks. The mist changes the dynamics combat drastically – if you’re brave enough to find out how.

A host of matchmaking updates are coming as well including a switch from Region Locked matchmaking to a new Quality of Service matchmaking. This is designed to make your games run smoother no matter where the other players are from. The first Ranked Season ends in mid-September and that means Reward Weapon Skins will be going out to those who qualify.

The future of Gears of War 4 has been mapped out as well including the Xbox One X support it will receive when the new console drops. Here’s what has been added into Gears of War 4 already since its launch in October 2016.

October will mark the end of the monthly maps and feature updates for the game but support is not stopping for the title. Here’s what The Coalition plans on adding to the game through 2018.

The new maps will join Public Matchmaking on September 12 so we expect the other updates to hit the game then as well. 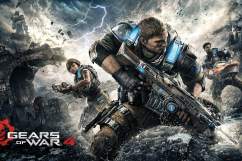