So the Injustice 2 Pro Series Grand Finals came to a close this evening (Sunday, September 17).

Everyone in the live streamed arena and those watching at home continued to stay tuned after the final match concluded. That’s because fans were promised a special treat – the gameplay reveal trailer for the next DLC character, Mortal Kombat’s Raiden. While a lot of people moaned about the inclusion of yet another MK guest roster addition, those same fans were left eating crow after this trailer ended. Simply put, Raiden looks awesome. He comes decked out in a new take on his traditional gear (that greatly exposes his godly chest) and also brings with him his mastery of lightning attacks. Raiden employs the use of his classic moveset, such as his forward rushing shove attack and his many lightning fueled fueled projectiles/traps.

While a lot has been said about who has the best super move in Injustice 2, Raiden makes a great case for his inclusion in that argument. Check out the trailer above to see what we’re talking about.

What made this Raiden gameplay reveal trailer 10x more hype was the reveal of Black Lightning. A lot of fans have been clamoring for Static Shock’s inclusion in the game; at least an African American character of his ilk has been added to the game. Black Lightning will obviously be selectable as an alternate skin for Raiden due to their shared use of lightning abilities. Both Raiden and Black Lightning will become available as DLC for Injustice 2 sometime in October. Black Lightning can be obtained by anyone who purchased the Ultimate Edition of NetherRealm Studios’ DC Comics fighter.

So now it makes sense for Hellboy to be the next Injustice 2 character who’ll be thrown into the fray come November. Then you should all expect to get a good look at the final offering of DLC characters for the next Fighter Pack in December (hopefully). 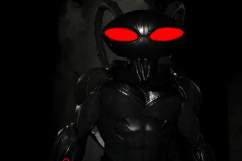