Destiny 2 for PC is finally here after players had to wait over a month after the initial release of the game. Destiny 2 was arguably the most hyped up game of year so many players were likely disappointed when they learned the PC version would be coming at a later date.

By having a later launch than its console counterpart, many players will likely be double dipping on the PC and console versions if they decided they couldn’t wait. Depending on how much you play, you could be at the maximum power level and wondering if you can transfer that content over to the PC version. It’s a fair question to have and we wish we had a better answer to share with you.

As of right now, there is currently no way to transfer your progress in Destiny 2 from PS4 or Xbox One to the PC version. This means if you have the console version and don’t want to start all over, you’ll just have to stick to that platform. If this isn’t a big deal to you, then you can just start fresh on PC.

The PC version does have some perks that you won’t find on the console version including a full 4K resolution and an uncapped framerate. For all of you performance junkies out there, this will definitely be the version for you. If you have somehow managed to wait all this time without trying the game out, you’ll definitely find a lot to like here. More perks include text chat, mouse and keyboard support, an adjustable FoV slider, 21:9 widescreen support and more.

In anticipation of the launch, don’t forget to check out the system requirements. While you won’t be pushing 60 FPS and 4K with the recommended or minimum specs, you’ll certainly be finding yourself getting a much better experience than the console version.

For more Destiny 2 guides, walkthroughs and news make sure to go here and check out our coverage. 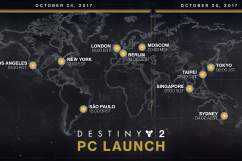