Another patch and another reason to think things are very well in hand for the upcoming esports events at BlizzCon 2017. This patch is rather small compared to those in recent weeks and it doesn’t contain many fixesat all.

It’s understandable during the buildup to BlizzCon 2017, there is always the preening of feathers. Smoothing over every aspect of the game and making sure everything is just right for the big show.

In the case of Heroes of the Storm, the big show is the Heroes Global Championship Finals. The HGC Finals boast a big prize pool and a global who’s who of professional competitors. Here’s a few notes on today’s hotfix and what it means for the main event.

The HGC Finals may end up with a ton of footage for the highlight reel. Because their are new heroes and refined gameplay in the newer Heroes 2.0.

The most talented players in the world are about to get their hands dirty. Get ready for an all out brawl in the Nexus and pay attention to the attention HotS is now getting on the global stage. It’s only year two for the HGC but people are starting to pay attention.

With a million dollars in prize money for the finals and a whole lot of media buzz; it’s time to take the Heroes Global Championship serious. Despite it being the new tournament on the block, people are settling in nicely, to one of the best designed competitive leagues out there. Also, the ability to add new heroes from any Blizzard universe is expanding the base.

HotS wasn’t a game people thought would make it. It was going up against some of the biggest names in the MOBA business. Heroes blazed it’s own trail and now in preparation for BlizzCon 2017 it’s earned a little props.

It’s here to stay and it’s sure to make a splash, especially with new battlegrounds like Volskaya Foundry. If the amazing frustration of huge treadmills doesn’t get you pulling out your hair. Then Gazlowe using the belts to bring you a gift of 30 turrets will. There’s more to this Cho-Gall meets garden terror, so stay tuned for the big mech at HGC Finals. 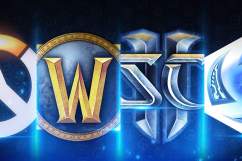