Season 2 of Fortnite: Battle Royale wraps up soon and with it will bring the start of the highly anticipated Season 3. Instead of having the medieval look of the knights, we’re instead going into the future.

This Battle Pass will feature 30 extra tiers when compared to the Season 2 one, bringing the total number to 100, but Epic Games has made it so you should still be able to get all of the tiers completed in 75-150 hours.

With the additional tiers, that means there is more room for additional skins and other goodies. Season 3 will give players access to six outfits, three pickaxes, four emotes and three gliders. Players will also unlock 21 emotes and 23 banners by finishing this Battle Pass.

One thing that is new with this season is the ability to earn new loading screens, skydiving FX trails and back blings, which we’re not entirely sure as to what back blings are. For 2800 V-Bucks, players will be able to purchase the Battle Pass plus a bonus 25 tiers. Single tiers are also available for 150 V-Bucks each.

Instead of having daily challenges, you will instead have weekly challenges. Each week of the season a new set of seven challenges appear. Completing four of the seven challenges each week will unlock your rewards so you should choose the challenges that best fit your playstyle. If you buy a pass mid-season you’ll still have access to all of the previous Weekly Challenges.

The Battle Pass is something that was introduced with the previous season and it is designed to give players a chance to win some additional loot just by playing the game. The pass does have to be purchased with V-Bucks but you’ll end up earning many V-Bucks back along with some additional skins and emotes depending on how often you play and how good you are.

You can read more about Fortnite: Battle Royale’s Season 3 Battle Pass at this link right here. We don’t have a definitive start date for Season 3 but we do know Season 2 has been extended through February 21 so players have an extra day to finish up any loose ends.

Season 2 has been extended through February 21! Have you finished your Battle Pass yet?

The double pump shotgun strategy running reckless across the Fortnite: Battle Royale community is receiving a nerf in an upcoming patch. You can read more about this nerf by clicking the link below. 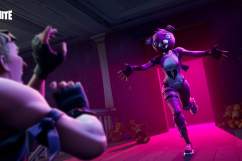