Only Konami would try to prove to the world that they can develop great Metal Gear games without Kojima’s guiding hand by making their first post-Kojima game (and first non-pachinko Metal Gear game) a survival game with zombies. The survival game genre is to today what military shooters were last generation. There are so many games trying to ride the coattails of Minecraft, Rust, Ark: Survival Evolved, and other games that one would drown in the sea of them. While Metal Gear Survive features moments of promise, all of the things that it does wrong ensure that it remains lost in that sea for all time.

You play as a soldier of Mother Base who was whisked away to an alternate universe known as the Dite, a wasteland inhabited by zombies known as wanderers. The game has you leaving the comfort of your base to explore the land collecting different items from other bases and rescuing survivors while avoiding zombies and keeping your health in check. You also have to keep your base up to date with new crafting stations, farms, and barriers.

The game has a story but it’s hard to remain invested in it. That’s not just because of the stock characters but because the cutscenes are so long that I couldn’t stand them half the time. The early cutscenes are actually pretty well shot and edited but most cutscenes devolve into dumps of exposition with nothing but slideshows for visuals. This is especially evident in the codec-style conversations which make up a lot of the game’s cutscenes. Some cutscenes even repeat information you’ve just heard in the last one. It’s like they wanted to emulate the long cutscenes Kojima was known for but didn’t know what made those cutscenes so enthralling despite their length.

I will admit that there is quite a bit of polish in this game. Thanks to the Fox engine the graphics are great and the whole production runs at a smooth 60 fps with only a few brief instances of slowdown. The controls are also pretty good save for the awkward process of readying a melee weapon like a gun in an fps game and climbing up the Bethesda-style mountains.

And believe it or not, Metal Gear Survive retains some of the spirit of Metal Gear Solid 5 in that missions have multiple ways of completing them. It can be fun to use the tools at your disposal to carve your own path through the world. You can summon different structures such as fences to block zombies or platforms to climb on. You also have a ton of options for combat other than your standard spears and bows, such as land mines or Molotov cocktails. You could lay down a trap and then toss a lure to lead zombies into it or you can shoot a fire arrow and burn the surrounding grass along with anything unlucky to be caught in it. Heck, the game can even pull off a foreboding atmosphere at times; areas cover in a thick gas called the Dust along with the dank basements of abandoned bases can be somewhat reminiscent of another misused Konami property Silent Hill.

However, the scope of the missions, level design, and the tools at your disposal aren’t nearly as dizzying, fresh, or fun as they were in MGS5. Stuff like dropping a fulton delivery container on an unaware enemy or using a partner to cover your escapes just aren’t possible in this game, and their exclusion is felt very much. The constant reusing of assets from MGS5 makes me especially miss the game. But the problem with this game is not that it isn’t as ambitious as MGS5 but that everything it does good falls apart due to an number of shortcomings.

Let’s start with one of the biggest problems: the zombies. My god are they a joke. They have moments where you can clearly see there was an effort to make them scary, such as when swarms of them suddenly appear on the side of cliffs, when masses of them are pushing down a fence, or when a body you previously thought was dead jolts into attack. But that terror is quickly undercut thanks to how exploitable their AI is. Zombies cannot climb tall ledges that you can, meaning that you can just hop up and stab away with your spear or toss a Molotov cocktail. Zombies also seem to be magnetized to fences, actively stopping to attack them instead of chasing you. I was able to destroy a fence blocking me from my objective not by attacking it myself but by luring a bunch of zombies near the fences and having them all dogpile them. Other times they’ll leap at you but completely miss. Most of the time, however, you can just sprint away from them for a short while assuming you have enough stamina or just group them together and plow through them with a spear, bow, or Molotov cocktails.

However, going after them with a close range weapon is a death sentence unless you unlocked the dodge ability while readying a weapon. Their swipes are so quick and damaging when they actually get to you that it’s inefficient to fight them without using a spear or a bow. You can also sneak around and backstab them for an instant kill, but their alertness is all over the place. Some zombies are almost omniscient while with others you could be standing right in their faces for a good second or two before they notice you. Most times it’s better to go in guns blazing and take them all out. Yes, this is a Metal Gear game where stealth can be more of a hassle than combat. Plus, I think we can all agree that their unicorn horns are more silly than scary. Even the game’s base sieges in single player and co-op aren’t nearly as fun or tense as they could be because the enemies are so limp, and in co-op they get a huge boost to health which just makes them a chore to chop down. The wanderers will go down in history as some of the worst zombies ever implemented in a game. At least they can claim to be a good source of unintentional comedy.

No, the true enemy in this game are the survival meters. You have two main meters, hunger and thirst, that decrease all the time even when in crafting or iDroid menus. Your life cap goes down with your hunger meter and your stamina cap goes down with your thirst meter. So you have to constantly stop to refill them. Since resources are readily available, this makes the meters more annoying than tense. Plus, the game nags you all the time to raise these meters even when they’re at a reasonable 50 percent. Your computer companion Virgil goes into laborious detail on how to raise your meters with the same message over and over again. And when it gets to 20 percent, a literal digital clock alarm goes off because why not use a sound already associated with annoyance to annoy the player? Things get even worse when you head into the aforementioned Dust, where not only does stamina decrease quicker but a third oxygen meter appears that you have to constantly stop and refill too. It doesn’t help that the map becomes useless in the Dust making you get lost easily. This clashes with the game’s demand of constantly extracting resources, with the extraction of precious Kuban energy from zombies taking far too long even with the unlockable skill that speeds up extraction times and containers that require you to not only wait for the lockpicking animation but also the inane minigame. You can’t get all of the resources you need because you have to go back to base to fill your meters again.

The inconvenience of your survival meters especially clashes with all of the quality of life additions to the game. All of your collected materials are stored at your base right when you return, negating unnecessary inventory management. You can build entire lines of fences at once in the base building mode instead of laying each one piece by piece. You can fast travel between different points on the map via teleporters to save you the inconvenience of traversal. How could the developers make the game so inconvenient when they put in so many conveniences for the player?

But what takes this mediocre at best and obnoxious at worst game to its real lows are the microtransactions. Features that came as standard in other games are now blocked by a paywall of Survival Coins. And there’s microtransactions to alleviate some of the grind of the game, such as boosts to resource acquisition and extra Crew Deployment teams for extra influxes of resources. This means that the grind is there just to encourage spending. Here’s what Konami “generously” allows you to buy:

Even if you argue that these microtransactions are optional, the fact still remains that if you want to play Metal Gear Survive at its most optimal with all of the save slots, emotes, and everything else, you need to pay $146. That doesn’t even include the $40 base price or the Premium Boost Passes and Support Defenders which you can theoretically buy forever.

Metal Gear Survive reminds me of Umbrella Corps. Much like how Capcom married the Resident Evil brand to a poor quality game just to chase the exhausted trend of online competitive shooters, Konami married the Metal Gear brand to a limp, stagnant game in order to hop on the well-worn survival game bandwagon. Metal Gear Survive may be a bit more enjoyable than Umbrella Corps, but the promise it does show just makes me all the more disappointed that we couldn’t have gotten something even better. It may have Big Boss, the ridiculously long cutscenes, the weird alternate history stuff, and even the classic sound effects of Metal Gear, but it’s as far from a Metal Gear game as you can get. The talent at Konami really did leave with Kojima.

If you want creative base building and enemies that are fun and challenging to put down, play Minecraft. If you want an open world game with strong stealth mechanics and tons of toys to play with, play MGS5. If you want a decent survival game that actually gives you the tense moments the genre promises without the annoyances, play literally any of the popular survival games out there. Fact is that Metal Gear Survive is outclassed by just about every single one of its contemporaries. And that’s before we even get to the microtransactions.

I’ll tell you that this game didn’t survive for long on my PS4’s hard drive. 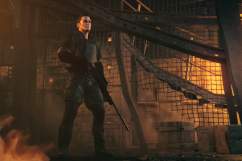 Metal Gear Survive: How to Get Clean Water