Celebi is finally being released in the wild in Pokemon Go, but how can you catch the elusive time-traveling Pokemon? You’ll need to use the same set of skills that you used to catch Mew, because Celebi is part of a new Mythical Discovery quest that started August 20. Just like with Mew, the first goals will be simple and then grow increasingly complicated with each quest. But like Mew, Celebi will likely have a high catch rate, so you won’t have to worry about not catching Celebi after you do all that hard work.

Here is what we know so far about all the special research tasks you’ll need to complete to catch Celebi, gathered from the Pokemon Go game data. This article will be updated as more details are released and the quests will be converted into a step-by-step guide.

If you want to participate in the Celebi tasks, you will need to have finished the third group of Mew tasks first, Pokemon Go shared. The announcement about Celebi reads, in part: “You can begin completing Special Research on Celebi at any time as long as you have done the third group of tasks related to the Special Research on Mew, and actively finish tasks related to both at your own pace!”

The third quest for Mew is to reach Level 15, battle in a gym twice, and battle in two raids.

Note: The Mew Questline is still open too. The Celebi quest line is on the same tab in the game, below the Mew questline, as noted by u/MageKorith on Reddit.

Here is what we know about the quests, as reported by Pokemon Go trainers on Twitter and Reddit.

The rewards for this quest are 10 Pokeballs, Fast TM, and a special incubator.

Rewards include 1500 Stardust, Sunstone, and a Premium Pass.

(Rewards include an Eevee encounter, King’s Rock, and a Premium Raid Pass)

(The rewards are Sun Stone, 1500 stardust, and a Premium Raid Pass.)

(The rewards include Starpiece, 15 Pinap Berries, and an upgrade.)

Tasks Found in the Game Data

Below are some of the quests and special research tasks that were found in the game data, according to Pokemon trainers on Reddit and Twitter. The game data details were first found by Chrales and posted on Reddit. These aren’t grouped by specific quests.

This list will be converted into a step-by-step guide, detailing which requirements are needed for each specific quest, as the details are available.

Tips for Achieving the Celebi Quests

If you’re concerned about adding new friends because you’ve already added everyone you know, consider the trading subreddit for Pokemon Go, or consider joining a Pokemon Go Facebook group for your city. Remember, many other players will be wanting to add friends too so they can complete the quests.

How are players getting past the second stage so fast, when you’re required to catch a Pokemon for three days? Some players are setting their time zones ahead so they can catch Pokemon early and do tasks ahead of time. (For example, they are turning off “automatic time” in the game’s settings and changing the timezone to a zone that is ahead of them, not manually changing the time. Then closing and reopening the game.) But many players may consider this “trick” cheating. And this may violate TOS, so it could result in a ban of some sort if you are caught.

One more important piece of information: You can only get one Celebi per account. Once you’ve completed the Special Research for Celebi, you can’t take the challenge again and get a second Celebi.

If you already caught Celebi during the Pokemon Go Fest Special Research event, you’ll receive candy when you complete these special research quest tasks instead of a second Celebi. But you can use the candy to power up Celebi, so doing all the tasks is still a worthwhile goal. 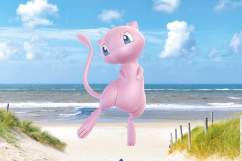 How To Catch Mew in Pokemon Go: Step-by-Step Quest Guide