A Senran Kagura Burst Re:Newal review code was provided by the publisher.

The Senran Kagura series isn’t shy about what its biggest attributes are – button mashing, crowd control mayhem and a whole lot of “T&A.” Its 3DS origins have surprisingly evolved into a franchise that’s garnered a bigger fanbase than anyone could have ever imagined. While the franchise’s spinoffs have delved into water-gun battles, dating simulators and even pinball, the bread and butter of Senran Kagura has always been its intense melee combat. Senran Kagura Burst Re:Newal stays firmly in that area of expertise and retells the origins of its “busty” Shinobi cast in the form of a remake. For fans of the anime stylings and humorous theme Senran Kagura embraces, this remake is worth your time. The repetitive combat and overabundance of digital erotica keep it from gaining any extra fanatics, however.

From a plotline standpoint, this remake is more interesting than you’d originally think. A collection of good and evil shinobi trains at their respective schools in order to master their chosen profession. Each mission feels like an episode of your typical anime – you’ll get a closer look at each lady shinobi’s backstory and find out what pushes them to excel.

The light-hearted nature of it all provides a few laughs here and there, plus some of the cutscenes manage to be more engaging than expected. However, being forced to read so many lines of dialogue before certain missions are far from enthralling. It would have been infinitely more satisfying to get more info on each shinobi’s upbringing and daily regimen through actual cutscenes instead of wallpapers adorned with text.

The main pull of this remake is undoubtedly its switch from 2.5D to full 3D action. This change in format puts it in line with the mainline sequels that came after the 3DS original. Each lady shinobi can rip into the opposition with huge combos that are aided by their signature weaponry. There’s a certain thrill that comes from starting off a basic combo, changing it up by pulling off a mid-air dash, continuing your attack string, and finishing it all off with a ground pound. Unlike the Dynasty Warriors games, the enemies aren’t just mindless drones who wait for you eliminate them. There’s actually a bit of strategy involved for all the baddies you encounter. Thankfully, you’re given a fun moveset to take advantage of.

There are weak attacks, strong attacks, air dashing, blocking/countering, character transformations, etc. The newest battle maneuver is the best one of all – the “Burst Mechanic.” Games like Senran Kagura are all about allowing the player to live out their power fantasy – the Burst Mechanic succeeds at getting that feeling across to whoever’s embracing it. The infinite combo strings that become accessible during this special ability feels and looks impressive in action. You’ll need to master each ability, especially when it comes time to engage in major one on one duels. The tough boss encounters test your mettle the most, which manages to add a bit more fun to the game’s collection of intense missions. There’s a decent amount of fun to be had throughout this beat ’em up.

But like many of the games that rely on Musou gameplay, Senran Kagura Burst Re:Newal settles into a repetitive pattern after a while. Taking down a collection of nameless scrubs gets a bit tiresome as you delve deeper into both campaigns. What starts out as a fun batch of battles eventually turns into a slight bore.

Once you’ve played with every character and become familiar with their moveset, the fresh factor behind them all wears off soon after. Getting to block/evade in midair and unlock other abilities occurs as you upgrade each character. But you’ll barely have any use for those new skills since bashing the light and heavy attack buttons are way more dependable than those added abilities. This is one of those games where you’ll settle into a pattern that rarely results in a loss, which ends up turning your time spent with it into a brain-dead endeavor.

Once you step off the battlefield, you’ll get to engage in some…well, questionable customization activities. If you’ve been following the series since its inception, the sex appeal that it exudes shouldn’t be an issue for you. It still comes off as a bit too much, though. The bouncing boobage, underskirt camera panning, and much too revealing outfits aren’t for the faint of heart. Attaching new attires to your favorite characters is still an enjoyable part of the game. Plus there’s a slight bit of enjoyment to be had from creating your own diorama scenes with each shinobi in training. The pervy themes present in these modes and cinematic moments will force you to play this in secret, however.

Senran Kagura Burst Re:Newal is a solid love letter to its burgeoning fanbase. The 3D action gameplay is a huge step above the original’s 2.5D combat. The anime stylized visuals look quite nice, the beat ’em up gameplay provides some bouts of entertainment, and the story is a bit deeper than you’d expect. But what keeps it from being a true recommendation is its repetitive gameplay and all too obvious reliance on boobs, butts, and…well, you know what else. Fans will love it, of course. It’s a remake that caters to them and them only. Everyone else should steer clear of its perverted thrills.

Our Senran Kagura Burst Re:Newal Review Score: 6.75 out of 10 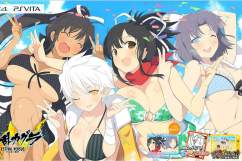 ‘Senran Kagura Estival Versus’ Review: A Festival Full of Shinobi & Plenty of T&A 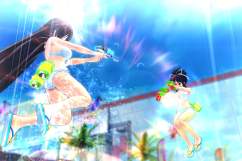