A Tales of Vesperia: Definitive Edition review code was provided by the publisher.

Gamers are currently living in an age where the games from years past are getting remastered or completely remade. While some of the more underrated titles from the last two generations of gaming receive unexpected remasters, a good number of standout classics also get their just due in that category. In a surprising (and highly celebrated) move, Bandai Namco Entertainment announced a remaster for one of the best entries in its long-running JRPG franchise. Fans not only look towards that game as the entry that set the bar for the releases that came after it, but they also regard it as one of the best JRPG’s of all time. If you consider yourself a fan of that sub-genre, then Tales of Vesperia: Definitive Edition is an easy recommendation to consider.

Tales of Vesperia’s story starts out simple enough – a former soldier named Yuri Lowell seeks out the mysterious individual responsible for stealing a magical energy device known as “blastia.” Yuri’s undying adoration for the people he lives with in the lower quarters of town pushes him to aid them in their time of need. During this mission, he comes into contact with royalty in the form of Estelle. Estelle happens to be on a personal mission of her own that just so happens to involve Yuri’s ally/rival, who’s a solider that seems to be in grave danger. The chance meeting between Yuri and Estelle ends up blossoming into a grand adventure packed with a host of lovable companions and old school JRPG storytelling elements.

What makes this Definitive Edition worth returning to or experiencing for the very first time are the newly added party members. The royal soldier you first seek out (Flynn) eventually becomes a permanent member of your traveling party. Getting to hear the philosophical differences between Yuri and Flynn during the game’s signature skits adds to the game’s charm and plot telling devices. Along with Flynn comes a cheerful young pirate girl named Patty Fleur. Her interactions with Yuri add even more hilarity to the journey at hand. For anyone who missed out on the Japanese PS3 port that featured these two major characters, now’s the perfect chance to get to know and better appreciate them. Thankfully, the rest of the traveling party members you eventually acquire are all lovable in their own ways.

The Tales of… games are known for their signature take on traditional RPG battle systems – the “Linear Motion Battle System.” Turn-based battles are non-existent here – you’ll carry out your offensive, defensive, and supportive abilities within action-packed real-time skirmishes. Pulling off big combos is a regular occurrence thanks to the seamless transitions between regular strikes and special skills called “Artes.”

Over time, the battle system deepens as you unlock new Artes, master “Fatal Strikes,” and pull off the game’s cinematic super moves (“Mystic Arts”). Mastering each character’s skill set is an enjoyable endeavor – it’s even more interesting now that you have two extra party members to upgrade and take into battle. There’s a definite joy that comes from watching one of your character’s shine brightly as they pull off a flashy new ability.

Tales of Vesperia: Definite Edition’s anime art style still looks fine. They looked impressive on last-gen consoles and maintain their high-quality today. The lush forests, vast oceans, and underground ruins managed to look a tad bit better to upscaled graphical work. A couple of quality of life improvements are missing, however, which would have truly made this remaster all the better. A lack of a map for each town you explore is hard to overlook. And the fact that a menu option that points you toward your next goal would have been nice. It’s a bit disappointing to see modern gaming tropes like these not being implemented into a notable remaster such as this one.

Another jarring element of this remaster is the change in English voice acting for Yuri during certain skits. While the bonus dialogue sequences are welcome and worth sitting through, Yuri’s voice actor replacement sticks out in an odd manner. The original voice actor for Yuri (Troy Baker) did an amazing job pushing his characteristics to the forefront – his sarcastic tone and playful reactions with Estelle made Yuri such a memorable personality in the first place. While the new voice actor isn’t terrible by any means, it does sound a bit off when you hear Troy’s voice throughout the entirety of the story than the new voice actor near the journey’s end.

This JRPG remaster does right by its legendary source material. The original version of Tales of Vesperia is still worth returning to on its own merit. But the Japanese PS3’s features that are a part of this remaster’s current-gen package turns it into a must-play for series fans.

The extra characters/party members, skits, battle abilities, and costumes do a lot to endear itself to those in the know and those who want to experience it for the very first time. The lack of quality of life improvements hamper the experience a bit for current-gen gamers, but Tales of Vesperia: Definitive Edition still maintains the lofty praise the original version garnered in years past.

Our Tales of Vesperia: Definitive Edition Review Score: 8.75 out of 10 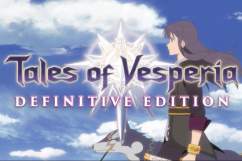