Id Software announced that Doom Eternal has been delayed to March 20, 2020.

This is a few months after the game’s initial release date of November 22, 2019.

“Throughout the development of Doom Eternal, our goal has been to deliver a game that exceeds your greatest expectations across the board,” said Developer id Software in a statement. “To make sure we’re delivering the best experience – for Doom Eternal to live up to our standards of speed and polish – we’ve made the decision to extend our launch date by a few months to Mach 20, 2020. We know many fans will be disappointed by this delay, but we are confident that Doom Eternal will deliver a gaming experience that is worth the wait.”

In addition, the Nintendo Switch version will release sometime after the game comes out on other platforms. The Switch version was initially set to release alongside other versions of the game.

Invasion Mode, a Dark Souls-like multiplayer option that lets players invade other players’ campaigns as a demon, will release as a free update shortly after launch.

Doom Eternal will enter a crowded release window when it launches in March 2020. Final Fantasy VII Remake, Watch Dogs: Legion and Animal Crossing: New Horizons are all releasing in the same month. 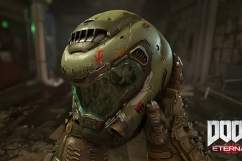