Destiny 2’s Season of the Worthy’s roadmap has finally released and there’s quite a lot of new content on the way. Along with Trials of Osiris, there will be a variety of PvE activities including Grandmaster Nightfall: The Ordeal, Legendary Lost Sectors called Bunkers and the Seraph Tower event. Unlike previous seasons, Bungie is hiding some of the new content coming to Destiny 2. So while the roadmap lists the dates for the core content, things such as Exotic quests and even the Revelry event are not mentioned.

Here’s a breakdown of each major event taking place during Season of the Worthy: 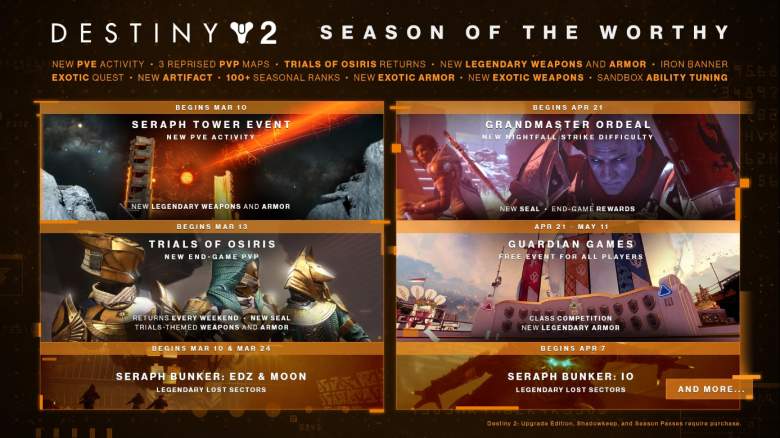 Little is known about the new Seraph Tower Public Event, but it appears to take place on the Moon and the EDZ. This almost certainly has to do with the massive towers we see in the Season of the Worthy trailer. Additionally, Seraph Bunkers are new Lost Sectors revolving around re-establishing communication with the Warmind. There’s also a new seasonal event called Guardian Games coming in late April. Described as “Class Competition,” this could potentially see Hunters, Warlocks, and Titans battling against one another to finally prove which class is superior.

Curiously, the roadmap does not list any dates for Iron Banner, even though it’s confirmed to return. This could be due to simply not wanting to fill the roadmap with old content or Bungie wanting to keep any new loot a secret. We also know that the Exotic Auto Rifle – Tommy’s Matchbook – will be the Season Pass reward. On Bungie.net, we can see an image of a four barreled shotgun, which could be a new Exotic weapon.

This shift of keeping some content release dates a secret is something that Destiny 2 has desperately needed. While it’s nice to know what’s coming, the best community moments are birthed from unexpected quests or activities. While I don’t expect a puzzle on the scale of the Corridors of Time, it’s still nice knowing that Bungie still has a few secrets up their sleeve.

Destiny 2 Season of the Worthy launches on March 10 for  PC, PS4, and Xbox One.