With just three days between the last water drop in Fortnite and this one, there were a lot of map changes to take in.

For the most part, the map looks the same when it comes to locations, but there are several smaller changes at many of the POIs that will be worth taking a look at.

Nothing happens in Fortnite accidentally, so we have to assume Epic is making all of the changes for a reason, and all of it could point toward the Season 3 live event.

One Reddit user went through with the massive undertaking of finding all of the changes, big and small, and compiled them all in one spot. Let’s take a look at their findings.

Massive shoutout to user chazyourboiii who discovered no less than 20 changes in the July 27 update.

With the exception of some of the named locations being free of water now, not a whole lot of note happened with the update. 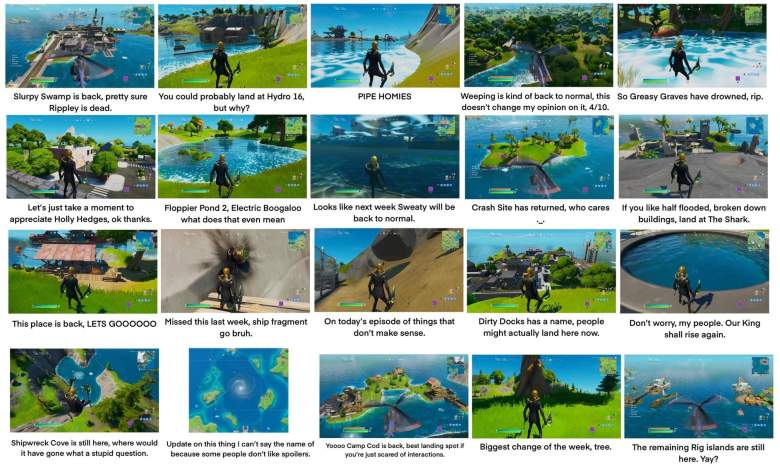 Weeping Woods looks like it’s pretty much back to normal, The Shark is making a quiet return, and Slurpy Swamp appears to be back.

When’s the Next Update?

For those of you out there who look forward to the plethora of map changes following an update, and we know there are a lot of you, there’s actually not that long of a wait before the next drop.

It has been revealed by leakers that the next update will take place on July 30, in just three days, and after that, there will only be one more map update to look forward to.

It’s anybody’s guess as to what direction Epic wants to go, but with the season winding down, the plot for Season 3 will likely begin to ramp up as we enter August. Provided there isn’t an extension, there’s about a month left of the season, so buckle up!

Keep in mind that every season so far of Chapter 2 has been extended, so we’re just going to have to hope that this time around will be an exception. Only time will tell.