Crafting is a big part of Fortnite Season 6 as if you want to get your hands on a powerful shotgun or assault rifle, this is what you’ll have to do.

Another new thing that was introduced this season is bows, and these aren’t like the wimpy crossbows from previous seasons. Instead, players have the chance to create wacky bows like Stink or Flame Bows, weapons that can become very powerful in the right hands.

Crafting is also what you’ll have to do to get your hands on these bows, and with so many different types to choose from, you’ll need to pick carefully.

If you’re a fan of flame bows, then you’ll likely be getting even more options to create on in the near future. According to a leak from HYPEX, there are three new bow formulas coming soon.

Upcoming/Scrapped Crafting Formulas (They are in the files but not enabled yet) pic.twitter.com/UYnXOBn7lG

It looks like Epic really wants players to create the fire bows because it appears that there will soon be two more ways to make one. Whether you’ll want to do it remains another question entirely because the peppers are excellent mobility options that you might want to rely on for rotations.

The Shockwave Bow on the other hand is something we can see a lot of players wanted to use. This does mean you’ll have to be fishing for Hop Floppers a lot more than you currently are, but this bow will come in handy in just about any situation.

Hop Floppers are already hard enough to find as it is, so you might find yourself fishing for the majority of your game if you want one of these bows, so it’ll be up to you to decide if this is right for you or not.

As for when this will release, there’s currently no timetable, but we do have a few guesses.

When Could These Formulas Release? 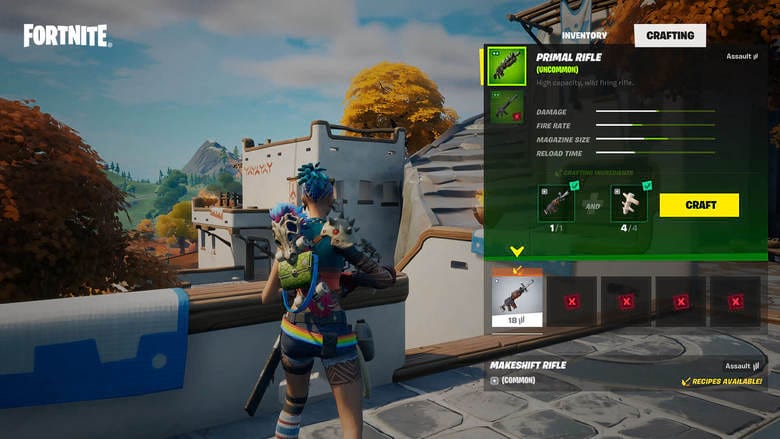 According to HYPEX, these formulas are already in the files, so all it might take it a simple flip of a switch to actually put them into the game.

Of course, there’s no telling if it’s as easy as that, but if we know about them already, that’s usually the case. It’s entirely possible Epic will wait for another update to enable them, so that will also be something to be aware of.

Alternatively, since these are in the files but not in the actual game yet, there’s even a chance that Epic decided to go in another direction and decided to not release these at all.

There are already a few different ways players can craft the fire bow, so maybe Epic concluded that we don’t need two more. It would be disappointing to not see the Shockwave Bow have more formulas, but it’s very important to take leaks with a grain of salt.

In the meantime, we’ll just have to keep our fingers crossed and hope these formulas end up coming out sooner rather than later. We don’t yet have word on when the next update will be, so keep your eyes peeled for that too.

Loading more stories
wpDiscuz
0
0
Would love your thoughts, please comment.x
()
x
| Reply
There will soon be more ways to craft things in Fortnite.