A new month is nearly here which means it’s time for Epic Games to unveil a new Fortnite Crew bundle for players to get their hands on.

As July comes to a close, that means Loki will be rotated out in favor of a new skin and cosmetics. As you might know, we’ve already gotten a look at this skin ahead of time through the Loki loading screen, so there are no surprises here.

The skin, officially called Summer Skye, will be entering Fortnite on July 31 when the current pack rotates out, but that won’t be the only thing players get here.

Let’s take a look at everything coming with Summer Skye and her Fortnite bundle. 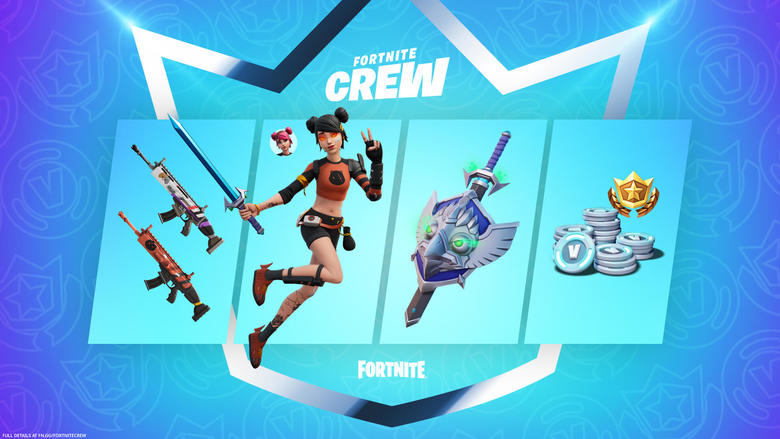 Epic GamesA look at Summer Skye and her cosmetics.

Anybody who is an active Fortnite Crew subscriber will see this new bundle enter their locker around 8 p.m. ET on July 31, which will be the last Item Shop update of the month.

The set is inspired by artist nollobandz and it includes the following:

On top of the regular style, you’ll also be getting the Stormy Skye style and you’ll be able to toggle on Skye’s hat as you please.

This skin variant didn’t start out as a version of Skye, but when Epic saw it, they decided to make it a twist on this old favorite. We’d have to say it worked out pretty well.

On top of all of this, you’ll also be getting 1,000 V-Bucks with your subscription and the Season 7 Battle Pass if you don’t already have it. The subscription will run you $11.99 a month, and if you unsubscribe, you’ll still keep all of the cosmetics you’ve unlocked to date.

The Crew Packs Will Be Evolving

The progressive Crew Pack Skin is still being worked on (not for August) The outfit is supposed to progress on each Crew Pack subscription after it, here's more stuff from 17.20:

It doesn’t look like it’ll be happening this month, but according to Fortnite leaker HYPEX, Epic does have some additional things in the works.

He says that there will eventually be a progressive outfit that will become more and more complete as the months go on, and eventually a skin will be unlocked through this method.

It’s tough to saw how many months will have to pass for this to happen, or even what the timetable is on the feature, but this is what we know so far.

Keep in mind that Epic Games likes to try out a lot of things behind the scenes, but not everything sees the light of day. This information is currently found in the game files, so if it is going to happen, it’ll likely be sooner rather than later.

Having more features for the Fortnite Crew pack is certainly a cool thing to look forward to, but we’ll have to just stick with what we have for the time being.

What do you think about the new Summer Skye style coming in August? It looks like one of the coolest skins we’ve seen yet!

READ NEXT: Fortnite Coral Castle Isn’t the Only Location Leaving