2020 was a pretty sucky year, all things considered.

The pandemic that kept us all from enjoying each other’s company at our usual hang-out spots changed everything as we know it. For the FGC (Fighting Game Community), its dedicated members were forced to engage in online tournaments for their favorite games instead of taking on the live competition existing in close proximity. That major change in the way fighting game tourneys was experienced worked to some extent. And thankfully, a nice selection of quality fighters launched and kept its assorted fans satisfied all the while.

With a new year comes a huge selection of brand-new games. And as expected, a good number of them will let you claim victory over your opponents through careful play and combo mastery. These are the upcoming fighting games you need to play in 2021.

Hellish Quart goes the Bushido Blade route for its one-on-one duels. It incorporates motion-captured fencing techniques and relies on physics-based mechanics to power its clashes between masterful fencers. The game’s roster features a solid lineup of 17th-century warriors that do battle with sabers, rapiers, broadswords, and so much more. Besides intense clashes with the AI, you’ll also get to engage in local multiplayer battles. Hellish Quart’s realistic swordplay and historical setting provide a perfect match for this intriguing weapons-based fighter.

If you’re an old-school wrestling head that practically lived in the arcades during its heyday, then you most likely spent plenty of quarters on WWF Wrestlefest. Retrosoft Studios has a soft spot in its heart for that classic in-ring brawler, which is why they’ve opted to produce an official sequel to that game. Enter RetroMania Wrestling, a throwback to simplistic yet wholly engaging wrestling games. Real-world wrestlers that hail from the indy scene and present-day NWA are joined by recognizable Hall of Famers within this retro wrestling experience. RetroMania Wrestling’s easy to pick up and play combat mechanics should do enough to make you and your fellow wrestling fans appreciate its nods to the good old days.

Buy a PSN Gift Card here so you can digitally purchase RetroMania Wrestling.

Buy an Xbox Gift Card here so you can digitally purchase RetroMania Wrestling.

Akira and the rest of the recognizable members of the Virtua Fighter roster are coming back once again. And they’re looking better than ever thanks to a graphical facelift thanks to Ryu Ga Gotoku Studio’s Dragon Engine. Nostalgic gamers will get even more 3D fighting game action via Virtua Fighter 5 Ultimate Showdown. The entire roster and the impactful fisticuffs from the other iterations of the game will make their return here. Plus we’ll be treated to an all-new opening cinematic, new lighting & shaders, a new user interface, and so much more. Virtua Fighter 5 Ultimate Showdown is bringing back Sega’s premier 3D fighter in a major way. 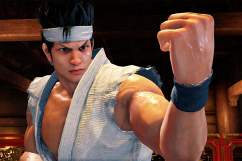 Daisuke Ishiwatari, the Japanese video game developer known for his work with the Guilty Gear franchise, is going big with the series’ 2021 installment. And by the looks of it, the word “big” is an understatement. Sol Badguy, Ky Kiske, May, and a host of returning/brand new characters are back to rev it up with anime-stylized weapons clashes. The presentation is even more gorgeous than before thanks to camera close-ups of big moves and the ability to knock your opponent to a new place on the current stage you’re doing battle on. The series’ signature metal soundtrack is still intact, the legacy combatants mark their return with refreshing new gear and the one-on-one action is just as hype as it’s ever been. 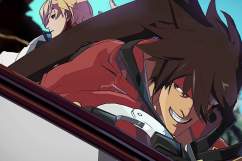 The gaming market is sadly bereft of any boxing games these days. Electronic Arts’ Fight Night isn’t around, so another digital pugilist simulator has been forced to take over its much-lauded spot. That brand new contender is Big Rumble Boxing: Creed Champions, which gathers up the past and current generations of boxers from the Rocky movie universe. In-ring specialists, such as Adonis Creed, Rocky Balboa, and Clubber Lang, can be chosen as you face off with equally intimidating boxers. Big Rumble Boxing: Creed Champions features a strong roster, a nice variety of arenas to do battle in, cinematic knockouts, and so much more.

Anime fighting game fans have probably put an ungodly amount of hours into the little-known yet still heralded Melty Blood Actress Again Current Code. While a lot of folks associate that game with the running joke of being the type of fighter that has bathroom tournaments, hardcore fighting game fans know just how complex and hype Melty Blood can be. The announcement of a brand new entry in the series came out of nowhere and has now garnered a bit of excitement now that footage is out. Melty Blood: Type Lumina updates the series’ anime visuals and retains the exciting battle mechanics it’s celebrated for. The characters that hail from Tsukihime: A Piece of Blue Glass Moon will engage in battle for all to see and enjoy in this one, so be ready to enter the fray.

We got another Super Smash Bros. clone on the scene! And to the shock of everyone, it actually looks halfway decent. Nickelodeon All-Star Brawl features a huge offering of cartoon icons that can be chosen to participate in four-player battle royals. Danny Phantom vs. SpongeBob Squarepants vs. Reptar vs. Powdered Toast Man is an actual battle scenario that can only take place in this party brawler. Those fantasy fights will take place in some super recognizable locales, such as the Technodrome from Teenage Mutant Ninja Turtles and Jellyfish Fields from SpongeBob SquarePants. Keep your eyes on this unexpected Nickelodeon dream fighter.

Die by the Blade

Hellish Quart isn’t the only Bushido Blade inspired fighter that’s on its way. Die by the Blade is also stepping into the 1v1 sword-fighter arena and incorporates the best components of Way of the Samurai and Dark Souls. This close-quarters fighter features local/multiplayer battles alongside single-player, AI-focused conflicts. Fights can end in a single hit if you’re strategic enough to land one, plus the game features a deep parrying & blocking system that keeps you from dying so easily. Die by the Blade’s “Samuraipunk” aesthetic provides a unique background for each and every hotly contested sword fight you’ll participate in.

You’ve either experienced Phantom Breaker through its original fighting game form or delved into its chibi-stylized beat ’em up spinoff title. That previously released 2D fighter is getting a welcome upgrade that will transform it into the most definitive version released thus far. Phantom Breaker: Omnia includes past members of the roster and adds two brand new challenges into the fray. The soundtrack has been remixed to match modern-day standards, the story mode campaigns have thankfully been kept intact, and your usual array of fighting game balance changes will also come along for the wild ride.

The developers behind Metal Revolution may be embracing a more minimalist control scheme, but that doesn’t mean its robot brawler will be a brain-dead brawler. This fast-paced fighter gives players the freedom to get as creative as possible with each robotic combatant on the roster. The visual sheen is extra clean, which helps the chaotic and extra flashy combos and super moves look all the more mind-blowing in action. Metal Revolution’s fast and furious combat looks like it’ll result in the FGC getting another title to throw their massive support behind.

And here’s a few fighting games that were released years prior, but are now making their way to certain consoles for the first time in 2021: