KSI is one of the most popular creators on YouTube. His channel currently has over 19,000,000 subscribers, and today he’s scheduled to face fellow creator Logan Paul in a boxing match at the Manchester Arena. The match is touted to be one of the biggest events in YouTube history, and KSI is rumored to collect a sizable paycheck as a result.

The match has also caused many to wonder just how much KSI, born Olajide William Olatunji, is worth. According to the Gazette Review, he has an estimated net worth of $11 million. This number has risen drastically over the past few years, as Forbes listed his net worth to be $4.5 million in 2015.

Learn how KSI doubled his fortune below:

According to the Telegraph, KSI dropped out of high school so that he could pursue his early career as a YouTuber. His decision upset his parents, who felt that he wouldn’t be able to make a living. “They said this is the dumbest thing you have ever done, you are going to throw your life away, why would you just want to play games, you can’t make money from games, it’s stupid,” he recalled. “Now they have completely changed. They’re doing videos with me and my brother all the time and they completely get it.”

Since starting his channel in 2009, KSI’s videos have earned over 4 billion views. His topics have expanded with his fame, but he is perhaps best known for his FIFA videos, which he says are his favorite to make. “FIFA is my baby,” he explained. “I have to pinch myself sometimes… I am living a lifestyle most guys my age would love to lead, playing computer games and earning good money. If you think of KSI, people instantly think ‘ah, that Fifa YouTuber’. I didn’t think I would be up there as the ambassador of Fifa on YouTube, but I’ll take it.”

In a recent report, Esquire established that KSI makes up to £250K from advertising revenue on his videos, and that influencer marketers believe he can pull in something in the region of £75K for a product endorsement on social media. KSI is also the director of three companies, and his total equity amounts to £1.7 million.

2. His Debut EP Peaked At Number 1 On the UK R&B Charts

Since his YouTube channel has taken off, KSI has also pursued a music career. He released his first song “Lamborghini” in 2015 and followed it up with his debut EP Keep Up. The latter peaked at number 1 on the UK R&B Albums Chart, number 13 on the UK Albums Chart, and number 15 on the Scottish Albums Chart.

KSI has released three additional EPs since then: Jump Around, Space, and Disstracktions, with the former also peaking at number 1 on the UK R&B Chart. His most popular diss track, “On Point” (aimed at Logan Paul), currently has 17 million views on YouTube. Check it out above.

In an interview with GRM Daily, KSI said that he was incredibly fortunate to be able to have a music career. “Yeah, it’s been really good,” he said. “It’s encouraging and exciting as well to see that I have a fan base that will allow me to do my passion and what I enjoy, ’cause obviously you’re gonna get people who are gonna be like “you can’t do this blah blah blah.” But I feel the support heavily out ways the hate.”

As for the future, KSI says he still has lots more to say in his music. “I feel like there’s still more of me to show,” he explained. “I feel like once I put out an album, that’s when I’ll show you my true self. Right now I’m just showing you bits with the whole EP thing. I still have so much to write, it’s not like I’ve given everything out, there’s so much for me to talk about.”

KSI’s most notable purchases have included a collection of gold shoes and a Lamborghini Aventador. He posted a video titled Reacting to Wroetoshaw’s New Car! on November 30, 2014, and while some fans assumed that he was borrowing the car, he later confirmed that it was his. Later the same year, KSI paid to have the Lamborghini “wrapped,” which means that large sheets of printed vinyl are used to cover a vehicle and alter its appearance. The car was given a new LED light and sound system as well as a purple and orange color scheme.

In September 2017, KSI said that he was “parting ways” with the Lamborghini. In the video titled RIP Lambo, he said: “I can’t believe it. I have to sell the lambo. Obviously because my money supply is very low at the moment. So any bit of money I can get, I’ll take.” Watch the full video below.

In addition to his hobbies, KSI has used a large chunk of fortune to donate to various charities. In 2015, he donated $10K to Castro1021, which raises money for the Macmillan Cancer Support group. That same year, he participated in the Race Against Slime event, which raised thousands for SpecialEffect, a foundation that helps people with physical disabilities play video games through technological advances.

In June 2016, his group The Ultimate Sidemen hosted a charity soccer match in Southampton against another team of YouTubers. The event quickly sold out, and wound up netting $110K. It was then donated to the Saints Foundation, which is an organization that works with thousands of young people in the surrounding area to promote “positive change and equal opportunity” through “youth inclusion, lifelong learning, health & wellbeing, education, schools & enterprise, and football & sports development.”

In a 2014 interview with the Telegraph, KSI said that his YouTube success has allowed him to play off the house where his parents live. “I was able to pay for my parents’ house which was really, really cool, it was the best thing I could ever do for them,” he said. “They have looked after me so it was awesome for me to be able to look after them.”

5. He Stands to Collect All the Ticket Sale Profits from the Logan Paul Fight

While the specific amount of KSI’s payday has been withheld, it has been confirmed that he will make 50% of the purse from his fight with Logan Paul. Furthermore, KSI will take all the profits from the fight’s ticket sales, with Paul scheduled to receive all of the ticket sales from their US rematch next year. The Mirror reports that the payday is guaranteed to be somewhere in the millions.

Both KSI and Paul have been criticized for making the fight a PPV event on YouTube. The former got on Twitter to address these criticisms on July 19. “Just wanted to address those asking why we’re charging to see the fight,” he said. “The cost of the event itself is on another level to last time. Plus the press conferences, weigh-in and making other content for the new channel, all adds up.”

“We want to make this as big an experience as possible for everyone watching, without cutting corners,” he said in another tweet. “We’re keeping the pay per view price purposely low compared to other events and looking to give as good value as we can.” 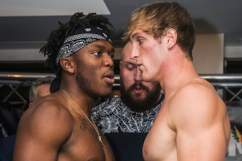 KSI vs Logan Paul: How to Watch & Stream Online