Chris Brown preforms during the World Music Festival “Mawazine” in Rabat on May 20, 2016. (Getty)

After much silence, and a barrage of controversy, Chris Brown has finally addressed the restraining order filed against him by ex-girlfriend Karrueche Tran and his rumored boxing match with rapper Soulja Boy. The “Loyal” singer took to Instagram to post a video explaining his stance on the matter, and why he feels that things are being blown out of proportion in the public eye.

“Don’t be listening to all this bullsh*t, man,” Brown says about Karrueche and his alleged physical abuse, “whatever them people doing on the other side, let them do what they doing.” Brown, who was also rumored to have threatened her life, added that “I don’t know what the f*ck they doin.”

The singer then goes on to confirm that he did in fact bow out of the Soulja Boy fight, and that he did so because “all the wrong people got in the way. Middlemen, people got in the way because they wanna get a piece of the pie.” Brown called the hype surrounding the match “immature,” and that if Soulja Boy is interested at coming at him in public, he should feel free to do so. “He gon’ see, he gon’ see me,” he stated. Check out the full Instagram post below. 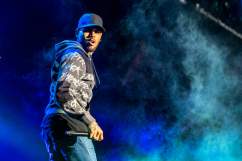