Zayn Malik is back to work on his sophomore solo album, and it looks as though he’s just landed a major feature.

According to The Sun, Malik and pop superstar Justin Bieber has been in talks to collaborate with Malik on a couple songs. An inside source for the publication states that “Justin has been really complimentary of Zayn’s new music and there have been tentative discussions about them working on something new together. They are in touch and chatting about all sorts and getting on like a house on fire.” The insider went on to say that “Justin even retweeted a link to Zayn’s single on his Twitter which he doesn’t do for anyone.”

This friendship may be surprising to some, as Bieber and Malik have had a rocky relationship in years prior. In 2016, Bieber accused his ex-girlfriend Selena Gomez of cheating with the One Direction singer, while Malik reportedly seemed indifferent to the idea of collaborating with Bieber on his first album Mind of Mine, telling Capital FM “I’m not really trying to do that… It’s not something I’m trying to sway towards.”

Malik’s untitled second album is rumored for release sometime in August. Check out his latest single “Still Got Time” below. 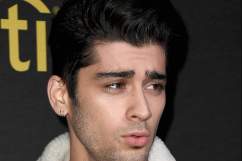