Drake’s More Life is hours away from its premiere on OVO Sound Radio. Fans are eager to get their hands on the long-awaited project, which will sport guest spots form The Weeknd, 21 Savage, and Giggs. Drake discussed the album/playlist to DJ Semtex on Episode 39 of OVO Sound, saying its “what would happen If I did an OVO Sound Radio but it was all new Drake songs.”

With that in mind, and affirmation from producer Noah “40” Shebib that the project was delivered yesterday, More Life is set for release on 3 p.m. PST/6 p.m. EST. How can you listen to it? Tune into the OVO Sound Radio on Apple Music, where series host Oliver El-Khatib will presumably air the project at the designated.

The link to stream the episode and More Life is right here.

UPDATE: OVO Sound was reportedly delayed for some last moment alterations. Check out the tweet below.

Slight delay, who you wanna hear on #MoreLife? 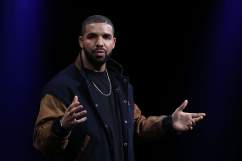