After teasing the artwork and the star-studded tracklist, Rick Ross has released his anticipated album Rather You Than Me. the project features guest spots from Dej Loaf, Anthony Hamilton, Nas, Future, Gucci Mane, Jeezy, Wale, Ty Dolla Sign, Raphael Saadiq and Young Thug among many others. Even comedian Chris Rock drops by to appear on the controversial track “Idols Become Rivals.”

The album, Ross’ first since 2015’s Black Market, has made headlines for Ross’ perceived disses at Cash Money mainstay Birdman. The song also drew the praise of rapper Lil Wayne, who is curiously absent from the tracklist despite the lengthy roll call of rappers. Still there are more than enough to make thoroughly satisfy any Ross fan.

Stream the fourteen track album below. 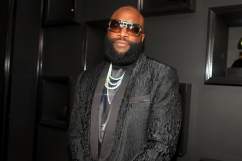