Harry Styles is a singer, songwriter, and former member of the group One Direction. In the wake of the group’s breakup, Styles has arguably been the most quiet, with no guest appearances, no new material, and an ultimately absent image in the media. As it turns out, he was bidding his time to come back with a vengeance.

Styles is scheduled to make his acting debut in Christopher Nolan’s WWII epic Dunkirk in July,  but the thing that has fans most excited is the announcement of his debut solo album. Still untitled as of now, the album has recently picked up steam as the lead single “Sign of the Times” premiered on BBC 1 Radio. To commemorate this achievement, we’ve compiled the 5 fast facts you need to know about Harry Styles’ new album.

Most of the Album Was Recorded in Jamaica

In an interview with Carson Daly on 97.1 Radio, Styles confirmed that he recorded most of his debut album in Jamaica. “I took like a month, and then started to realize I like doing stuff, so I got a little bored,” Styles said, before explaining why he decided to travel to Jamaica for inspiration: “The last couple of One Direction records we made on the road and that was amazing and a lot of fun. And for me, I think I just wanted to kind of, more so than be different from that, I jet wanted to get out of somewhere where I had all my friends and where I’d want to go to dinner at a certain time.”

Styles added that “I just didn’t want to get distracted. I kind of just wanted to very much immerse myself in doing it… We did 50 songs in Jamaica and that’s including little ideas.” As for how Jamaica influenced the music on the album, close friend and BBC Radio host Nick Grimshaw joked that he’s praying for “some awful white man reggae.”

2. Ed Sheeran Heard the Album Before Anyone Else

Once Styles was faced with the challenge of whittling down 50 new songs for the tracklist, he called upon the ear of his superstar friend Ed Sheeran. “I played him a few songs after the album was finished,” Styles told BBC Radio 1, “He didn’t say that he didn’t like any but he did like one song that isn’t on the album.” And while ignoring the advice of one of the most successful singer/songwriters working today may seem risky, it’s clear that Styles has a specific vision in mind.

“He is a really good guy,” Styles said of Sheeran, “He’s one of the most talented dudes I know.” This isn’t the first time Sheeran’s name has popped up in reference to the Harry Styles album. Earlier this year, the “Shape of You” singer told The Mirror a few details about the album, saying “I’ve heard a little bit, I’ve heard a little… it really shows him off as an artist and a singer, which is what it was always going to be. I can’t say too much about it as it’s not my project, and I’ve got no idea when it’s coming out. It’s quality.”

3. Ryan Tedder Will Appear On the Album

Ryan Tedder is one of the most prolific songwriters in popular music today. In the last decade, Tedder, the lead singer for OneRepublic, has written “Bleeding Love” for Leona Lewis, “Halo” for Beyoncé, and “Rumor Has It,” for Adele among many others. So it comes as a definite perk that Tedder is slated to contribute his vocals and songwriting chops to Styles’ new album. “We’re going to be writing something for his solo album,” Tedder told The Sun in 2016, “We did work together in London a while ago but we definitely will again. He’s always writing songs. He’s a brilliant writer.”

Tedder also spoke on the collaboration with Key103, teasing that they’ve “done a couple of things” and that Styles is “phenomenally” talented. “You know they say you can’t judge a book by its cover, but clearly the man has taste in a number of areas and that also is true with writing,” he explained, “I would love to write with him in the future for no other reason that he is one of the chillest dudes I’ve hung with and down to earth.”

4. The Single ‘Sign of the Times’ Has A Classic Rock Influence

The most surprising, and promising thing about Styles’ debut single ‘Sign of the Times” is that it pulls from classic rock luminaries like Pink Floyd and, most notably, David Bowie. The Guardian deemed it “the Bowie of Hunky Dory rather than Bowie the drug-ravaged aesthete of the 70s,” and “a credible piece of indie-pop balladry that moves Styles into a new arena.” Purchase the song on iTunes here.

Billboard went a step further in their reading of the track, writing that it “serves as a kind of rock history lesson, folding in psychedelic soul, indie rock, and spacey pop… Styles appears to be both showing his range and making a clear effort to step boldly away from the manufactured, plastic pop of his past.” And while there are a minority of people who disapprove of this new sound, most seem to think that Styles is poised to do something big with the full-length album.

5. The Album Is Coming ‘Very Soon’

While there has yet to be an official release date announced, industry rumors suggest that fans will get Styles’ album sooner than later. In an interview with Billboard, Columbia Records CEO Rob Stringer was asked about the album’s status, and he responded by saying: “We’re close and we’re very excited. We have a record we’re incredibly excited about and it’s not far away from being ready. We obviously want everything to be beautifully done, because we think he’s here to stay. Harry has stepped up with the vision of someone who’s authentic.”

These quickly approaching rumors are further supported by the fact that Styles has been seen filming the music video for “Sign of the Times” on location in Scotland, while BBC Radio reportedly said the album could be out as soon as late April or early May. Either way, it looks like Styles fans don’t have much longer to wait. 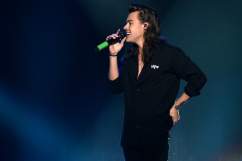