With only a few hours until April 7th was upon the world, Kendrick Lamar had the world waiting in anticipation. The promise of a new album was palpable, and egged on through a series of tweets, erased Instagram posts, and the lyrics of Lamar’s promotional single “The Heart Part 4,” which warned everyone that “ya’ll better get ya’ll sh*t together” before April 7th. It wasn’t dissimilar to the rollout of Lamar’s prior release, the outtakes compilation Untitled Unmastered in 2016. Now, however, the truth behind this April 7th date has been revealed.

What Lamar meant by getting “ya’ll sh*t together” evidently, was that he was intending to announce the proper release date for his fourth studio album. The still-untitled effort will not be heard on the 7th, as many initially thought, but a week from said date, on Friday, April 14th. The news was announced in typically subtle Lamar fashion, as a sudden pre-order appeared on iTunes for what still looks to be a secretive project.

The iTunes pre-order comes with nothing more than a black cover and the word “ALBUM” in all caps. While there has yet to be song titles, we now know that there will be fourteen tracks including the previously released “Humble.” The warning label beneath the album cover does warn that “pre-order contents may change without notice,” implying there’s details that have yet to be unveiled.

There is also the possibility that the placeholder “ALBUM” title could be legitimate to the body of work, especially given the minimal title and similar artwork design behind Untitled Unmastered. Earlier this year, Lamar told T Magazine that “I think now, how wayward things have gone within the past few months, my focus is ultimately going back to my community and the other communities around the world where they’re doing the groundwork. I’m in a space right now where I’m not addressing the problem anymore. We’re in a time where we exclude one major component out of this whole thing called life: God.” He also deemed the album “urgent” for listeners.

You can pre-order this new album by clicking right here. In the meantime, check out the video for “Humble” below. 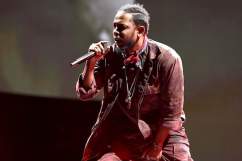