Kendrick Lamar‘s new album DAMN. is finally here. The eagerly-anticipated release came out on iTunes late Thursday night, and fans were blown away with Lamar’s cutting blend of tough lyrics and menacing hip-hop production. As to be expected, the Compton emcee also addressed events that have happened to him since the release of his last official album, To Pimp a Butterfly— namely, the criticisms thrown at him by Fox News and TV personality Geraldo Rivera over the song “Alright.”

The song, which Lamar performed during the 2015 BET Awards, had him rapping the controversial lyrics “We hate po-po/Wanna kill us dead in the street fo sho” while standing atop a vandalized police car with an American flag waving in the background. Needless to say, Fox News didn’t echo Lamar’s sentiment, and took him to task on the panel show “The Five.” According to Stereogum, Rivera was the biggest critic of the song, saying Lamar’s lyrics were “not helpful at all” and making the exaggerated claim that “this is why I say that hip-hop has done more damage to young African Americans that racism in recent years…. It is so wrong, it is so counterproductive, it gives exactly the wrong message.” Watch the full video below.

While Lamar responded to this backlash on TMZ, he clearly had more to say, based on the first three tracks of DAMN. The songs “BLOOD.” and “DNA.” both contain snippets of the now infamous news panel, with lines like “Views on police brutality” and “Oh please, ugh, I don’t like it” receiving extra emphasis.

Lamar kicks things up a notch with the third song “YAH.” On the second verse, the rapper goes out of his way to name Fox News and Rivera directly with the lyrics “Fox News wanna use my name for percentage/My latest news in my niece, she’s worth livin/See me on the TV and scream ‘That’s Uncle Kendrick!’/Yeah that’s the business/Somebody tell Geraldo this n*gga got some ambition.” It’s clear that Lamar doesn’t have a high opinion of Fox, and this clever little couplet, which highlights the fact that he’d rather focus on family than media headlines, is the latest nail in the coffin. Listen to previews of these songs, along with the rest of the brand new album below. 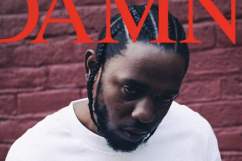 What Time Will Kendrick Lamar’s Album ‘DAMN’ Be Released Tomorrow?