While we’re still a few weeks away from the release of his self-titled debut, Harry Styles has seen fit to gift his fans with a brand new single: “Sweet Creatures.”

The song, which is track five on the album, premiered this morning on Apple Music’s Beats 1 Radio with Zane Lowe. It is the final single that will be released before the album officially hits stores on May 12th. Check out the link to Beats 1 Radio below.

“Sweet Creature,” Styles’ third release as a solo artist, departs from both the soft rock confessional of “Ever Since New York” (which premiered on Saturday Night Live last month) and the psychedelic soul of “Sign of the Times.” The latter single, which caused many critics to compare Styles to the late David Bowie, has since risen to number four on the Billboard Hot 100 and number one on the UK Singles chart. Click below to listen to a snippet of the heartfelt “Sweet Creature” below, which finds Styles adapting a country aesthetic. To purchase the single on iTunes, click here.

Recently, Styles ran into a bit of controversy when the band Shed Seven accused the singer of stealing the album artwork of their 1994 single “Ocean Pie.” According to The Sun, both covers feature a photograph of a shirtless man (in Styles’ case, himself) with their head in their hands. The way in which both men seem to be covered in water is eerily similar as well.

Shed Seven singer Rick Witter had this to say on the similarities: “When I first saw it I genuinely thought ‘Are you ripping us off? It’s very close to the mark.” Despite this, Witter added that “It’s a nice compliment. They really do say imitation is the biggest form of flattery.” Learn more about Styles’ upcoming album below. 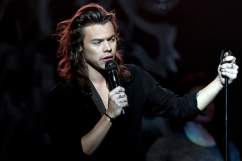