One Direction have been defunct for little over a year, but that hasn’t stopped the world from wondering when the boy band will get back together. It’s a question that’s been hurled at each former member, and has regularly been met with a generally positive response of hope.

This desire to see Harry Styles, Zayn Malik, Niall Horan, Louis Tomlinson and Liam Payne was further escalated when Styles performed a seminal One Direction song, “Stockholm Syndrome,” during his solo debut on The Today Show on Tuesday. With this in mind, and the burgeoning solo careers of the other members in tow, we investigate whether they will reunite sooner than later. Here are five fast facts about 1D that you need to know.

1. Niall Horan Is Confident There Will Be A Reunion

In a recent interview with The Sun, Horan spoke on the status of One Direction and where things are at in terms of a reunion. “It’s been a year and a bit already,” he explained, “We don’t want to put a time on it, but when that phone call does come, no matter whoever it comes from, we’re back again.” Horan also alluded to the fact that touring and solo careers are currently what’s obscuring the reunion from happening right away: “You know I’m going to probably end up touring this, Harry will probably end up doing the same, probably Liam probably Louis, that’s a year– time adds up.”

Horan also told Teen Vogue that he and the rest of the band have a “chain email” that they use to share their new music and keep in touch: “We are all weirdly perfectionists, so we don’t play anything until it’s completely finished because we don’t like early demos and stuff like that. They’re always asking ‘when’s it coming?’ I do the same to them.” Check out Horan’s latest single, “Slow Hands,” above.

Louis Tomlinson has been relatively quiet in terms of discussing a 1D reunion, but the little he has said has been somewhat vague. He’s been very supportive of Horan, to the point where The Sun reports that he’s “proud” that his former bandmate is finding his own voice: “Louis and Niall have stayed close since the breakup of One Direction and Louis could not be more proud of the new work Niall is creating.”

Earlier this year, Tomlinson appeared on The Today Show to perform his collaborative single with Steve Aoki, “Just Hold On,” and to address his career plans. When host Matt Lauer asked him about the possibility of a 1D reunion, Tomlinson said: “There’s time for that. Nobody knows [when]. I think we’re enjoying a bit of time to ourselves and exploring our own solo things”– not exactly an encouraging response. Watch the music video for “Just Hold On” above.

3. Zayn Malik Has Distanced Himself Altogether

Zayn Malik has unquestionably been the biggest question mark when it comes to a full 1D reunion. He departed the band in 2014 to go solo, and has kept little to no contact with Styles, Horan, and the rest of the boys. When asked about whether Malik would consider returning, Horan said: “To be honest, I don’t know the answer to that one. I’m sure the fans would love it and it would be great, but again I don’t know.” This testimony was confirmed by a Hollywood Life insider, who reported that the “only wild card is Zayn. He might not return if they decide to get back together.”

In a March interview with The Sunday Times’ Style, Malik revealed that he suffered from an eating disorder as a result of his One Direction lifestyle: “Every area of my life was so regimented and controlled, it was the one area where I could say, ‘No, I’m not eating that’,”. He also went on to say that he dealt with bouts of anxiety while touring with the band, but now it has been completely eradicated. For him, the odds of a 1D reunion seem very slim. Check out his latest single, “Still Got Time,” above.

Liam Payne, like Tomlinson and Malik, are caught up in the freedom and new responsibilities of being solo. Unlike his bandmates, however, Payne was less concerned with music, and more concerned with raising his newborn son, Bear, with girlfriend Cheryl Cole. He is the only 1D singer who hasn’t released any solo material, but according to NME, this will change in the imminent future. Not only is Payne prepping his debut single, but he is also reportedly working with hitmakers like Migos and Zedd to reinvent his entire sound.

A source close to Payne told The Sun that “Liam wants his solo music to sound like a mix between Justin Bieber and Drake. It’s definitely not going to be a hip-hop album. He has worked with so many different producers and artists. But what’s for sure is that his songs will sound very, very different to what Harry Styles has put out.” A reunion appears to be the last thing on Payne’s mind. Watch him accept the band’s 2017 BRIT Award above.

This could be the proverbial nail in the coffin for a 1D reunion in the near future. Styles has undoubtedly been the biggest member of the band in recent weeks, as his radical shift in style have prompted many to compare him to classic rock acts like David Bowie and The Beatles. Granted, Styles appeased the fans by playing “Stockholm Syndrome,” but according to Hollywood Life, getting the band back together is the last thing on his mind.

“Harry Styles loves the fans, loves the great times and loves what One Direction has brought to his life,” a source tells Hollywood Life, “But he went on The X Factor to become a solo artist. He is now living his dream and wants to take it to the level where he never has to worry about going backwards. He wants to be George Michael, he wants to be Michael Jackson, he wants to be Justin Timberlake. As much as he loves his 1D mates and the times they had, that’s now the past.” So while the hopes of an upcoming reunion may look slim, fans can take solace in the fact that it’s still a possibility down the line. 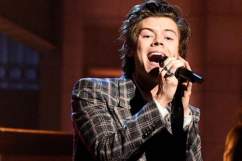 What Time Will Harry Styles’ Album Be Released Tomorrow?