Three-time U.S. Olympian Suzy Favor Hamilton recently worked as a $600-an-hour call girl in Las Vegas, according to a new bombshell report from The Smoking Gun.

I take full responsibility for my mistakes. I’m not the victim and I’m not going that route. I’m owning up to what I did. I would not blame anybody except myself. Everybody in this world makes mistakes. I made a huge mistake. Huge. 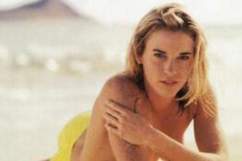 It’s a shocking revelation from an American role model. Favor Hamilton starred in a Nike commercial, is a motivational speaker and does promotion for Disney.

Favor Hamilton was a legendary NCAA athlete. In her time at the University of Wisconsin-Madison, she was the most decorated female track and field athlete ever. Her Wikipedia page cites these collegiate awards, among others:

But now the icon’s wholesome image has been shattered with the news that, for the last year, she’s been moonlighting with the Haley Heston’s Private Collection escort service, commanding $600 an hour.

And according to her escort profile, she was loving her new calling:

Hi, I am Kelly and proud to be a part of HHPC, and I absolutely LOVE it! … after my first date, I was hooked … I am a FULL GFE, and love to please, and have been described as fun-loving, extremely sensual, and sophisticated …