For anyone who can’t get enough of the Lord of the Rings universe, you’re gonna get a kick out of this story.

A collection of human fossils that were discovered on the island of Flores, Indonesia, has lent credence to the past existence of real-life hobbits — a separate species of diminutive humans.

The “hobbit humans” are said to have stood 3-foot-6 and had long, broad feet. These features make them similar to the size measurements of J.R.R. Tolkien’s fictional hobbit characters.

The bones have been linked to the Homo floresiensis (“Hobbit human”). A new entry in the Journal of Human Evolution noted that the wrist bones for the species were found to be identical to the bones of the other bones found at the same location.

Caley Orr, the lead author of the Journal of Human Evolution paper, spoke to Discovery News about the hobbit humans’ body formation:

The tiny people from Flores were not simply diseased modern humans. The new species of human stood approximately 3′ 6″ tall, giving it its nickname ‘The Hobbit.’

Discovery News noted that the hobbit human’s body was more similar to that of an ape, due to the species having arms that were longer than its legs. They also made note of their minuscule brain size, which likens their IQ to that of a chimpanzee:

The Hobbit’s wrist looked like that of early human relatives, such as Australopithecus, but the key ancestral candidate now is Homo erectus, “Upright Man.” It is possible that a population of H. erectus became stranded on the Indonesian island and dwarfed there over time. A problem, however, is that H. erectus is somewhat more modern looking than the Hobbit, so researchers are still seeking more clues.

Tracy Kivell, a paleoanthropologist from the Max Planck Institute for Evolutionary Anthropology, spoke about the fossils and their ties to new evidence of a past species:

These fossils provide further, clear evidence that H. floresiensis is in no way a pathological modern human, or that its primitive morphology is related simply to its small body size. Instead, it is clearly its own, unique and very intriguing species. What is particularly interesting is that H. floresiensis is associated with such a long, well-documented history of stone tools. [Its primitive hand and wrist were] still apparently capable of making and using stone tools, suggesting that H. floresiensis solved the morphological and manipulative demands of tool-making and tool-use in a different way than Neanderthals and ourselves.

Another journal entry about these Hobbit humans is said to be incoming by Orr and his team of scientists/researchers. 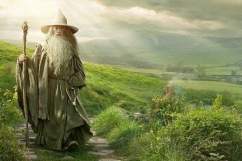 The Hobbit: Top 10 Facts You Need to Know

Read More
discovery, Lord Of The Rings, Science, The Hobbit

Loading more stories
wpDiscuz
0
0
Would love your thoughts, please comment.x
()
x
| Reply
Is this real or did the PR team behind "The Hobbit" leave behind some awesome promotional material for others to find?