This guy is going absolutely apesh*t!

Piers Morgan invited radio host and well-known conspiracy theorist Alex Jones, the man who wants the British television host deported back to his home country for criticizing America’s second amendment, to debate gun control on his talk show Monday night and went on an explosive rant while Morgan struggled to keep his cool.

Jones publicly backed a petition on the White House website to deport Morgan “for his effort to undermine the Bill of Rights and for exploiting his position as a national network television host to stage attacks against the rights of American citizens.” 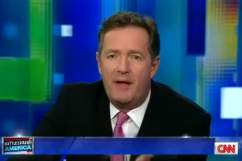 Jones turned into a fiery maniac on “Piers Morgan Tonight” while discussing the topic.

Jones also blamed depression pills such as Prozac for the recent mass shootings in Aurora and Newtown, arguing that the number one cause of death in America is suicide, due to the medication.

Morgan repeatedly brought up the fact that there were only 35 gun murders in Britain last year, where gun control laws are stricter, while America had 11,000.

Other than that, Piers couldn’t get a word in edgewise over Jones’ screaming. Hey, at least it made for good entertainment!