Sources say Adam Lanza was inspired by Anders Breivik (above), who slayed 77 people in Norway.

Adam Lanza is responsible for murdering 20 children, six elementary school staff members and his own mother, and sources say he was intent on slaying more as he may have been inspired by Norwegian mass murderer Anders Breivik, who killed 77 people.

CBS News reports that law enforcement sources believe that Lanza was obsessed with Breivik, who killed eight people in a car bombing in Oslo, Norway before fatally shooting 69 more, mostly teenagers, at a summer camp, and wanted to outdo the infamous murderer. Two officials say the 20-year-old targeted Sandy Hook Elementary because it was an easy target with a large amount of people clustered together.

Police found a massive collection of video games in a darkened den at the home of the Newtown murderer, where he would spend hours playing by himself. Lanza and Breivik shared a common love for Call of Duty, the realistic first-person shooter game that is believed to have “trained” Lanza for the massacre. 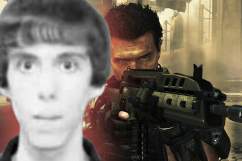 According to The Guardian, Breivik even admitted that he used to the game to train for his own attacks.

“It consists of many hundreds of different tasks and some of these tasks can be compared with an attack, for real,” Breivik said. “That’s why it’s used by many armies throughout the world. It’s very good for acquiring experience related to sights systems.”

However, despite the CBS report, the Connecticut State Police told the Daily Mail that the connection between the two slayers is “pure speculation.”

Loading more stories
wpDiscuz
0
0
Would love your thoughts, please comment.x
()
x
| Reply
Inside sources say Adam Lanza may have been trying to outdo Anders Breivik, who slayed 77 people in Norway.